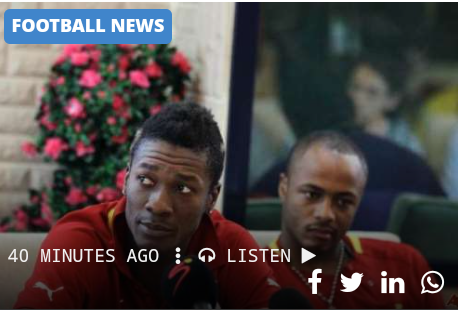 This revelation emerges after Gyan announced his intention of playing for the Black Stars in the 2022 FIFA World Cup during an interview with the BBC last week.

Ahead of the 2019 Africa Cup of Nations [AFCON] in Egypt, Gyan was stripe off his Black Stars captaincy and offered a new role as the General Captain of the side.

Andre Ayew was named as the new captain of the team.

The decision by the then technical team led by Kwesi Appiah attracted a lot of bashing while others supported the decision.

Gyan released a statement confirming his retirement from the national team but after presidential intervention, the 37-year-old rescinded his decision.

Dan Yeboah believes that if Gyan is to be added to the Black Stars ahead of the 2022 World Cup, Andre Ayew, who is the skipper for the side must be convinced.

“Another problem is that Dede and Asamoah are not on good terms. Dede is the captain now, if you add Asamoah to the team, it could bring issues. If we are going to send Gyan to the World Cup then we’ll have to speak to both of them. They laugh in public but it’s just for the camera.

“We should speak to them for them to appreciate that we’ll be sending them there in the interest of the country. What happened in the 2019 AFCON shows clearly that the two of them are not on good terms. Asamoah Gyan brings good vibes around the team but if he is to go, then we must speak to him and Dede to remind them that Ghana’s interest is supreme,” he said.

Asamoah Gyan has netted 51 goals for the Black Stars so far.

Content created and supplied by: Abdul8080 (via Opera News )