2021/22 Ghana Premier League: Have a look at the man of the match awardees at various venues.

By TheHague10 (self media writer) | 6 months ago 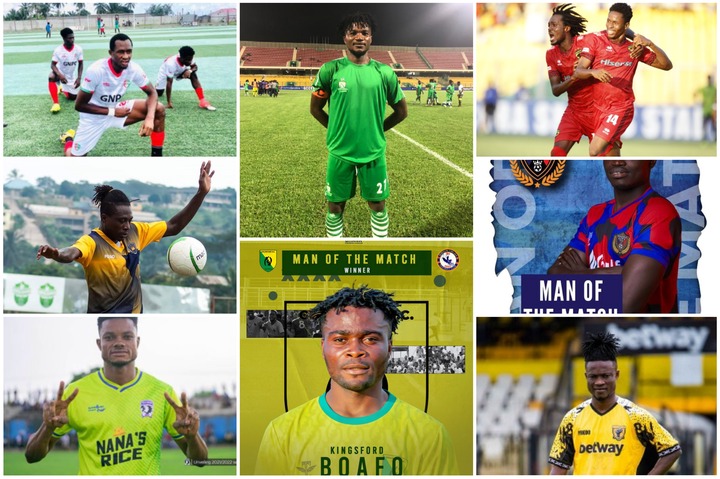 It was action-packed and euphoric as the first round of matches of the much-anticipated 2021/22 First Capital Plus Premier league happened over the weekend. The first match of the season ensued at the Accra Sports stadium on Friday, when Accra Lions locked horns with Elmina sharks, which played out in a one-all draw. Dream FC hosted Kumasi Asante Kotoko at Dawu on Saturday and Prosper Ogum's boys emerged victorious as they thrashed Dreams FC by 1-3. Seven games came off on Sunday, with the fixture between reigning Ghana premier champions, Accra Hearts of Oak and Legon Cities being the biggest among. The match resulted in a stalemate as no goals were recorded after regulation time.

However a number of players were awarded for their impressive displays and we bring you the list of man of the match winners at the various venues over the weekend.

A tough contest ensued between Odartey Lamptey's Elmina sharks and the newly promoted side in the opening game of the maiden season but despite the draw, Elmina sharks captain, Ishmael Hammond was adjudged the best player of the game.

Asante Kotoko's new boy, Richmond Lamptey emerged the best player in their entertaining clash with Dream FC. The man who was signed from Inter Allies started his season with his new club on a good note, grabbing the 3rd goal in a 1-3 drubbing of the Dawu based club.

Legon Cities net minder, Eric Ofori Antwi was the best player in their game against Hearts of Oak on Sunday. The former Black Satellites goalkeeper made a number of crucial saves to deny Samuel Boadu and his men the much needed three points in their opening game.

Obuasi Ashanti Gold began their season on a good note with Eric Esso's goal making the difference as they defeated Eleven Wonders at the Ohene Ameyaw Park. Ashanti Gold defender, Kwadwo Amoako won the man of the match award for his spectacular performance at the miners backline.

Bechem United new signing, Emmanuel Avornyo was amazing in their 4-0 demolition of Medeama FC, eventually winning the man of the match award. The former Uni stars striker struck twice, one in each half to help The Hunters secure all points.

A one-all draw was the final result at the Crosby Memorial park as Karela and Aduana Stars faced off. Aduana Stars winger, Emmanuel Gyamfi opened the scoring in the game but Karela United's hitman, Abdul Latif Dogo, who was the eventual man of the match winner equalized to salvage a point for his team.

Zubairu Ibrahim's late striker secured all points for Alhaji Grusah's King Faisal, as they defeated sogakope based WAFA by a goal to nil. 19 year old King Faisal midfielder, Evans Sarfo was adjudged the best player in the game.

Bibiani Gold stars registered a win in their first premier league game, beating Berekum Chelsea with solitary goal. Goalscorer, Kingsford Boafo was awarded the man of the match at the end of the game.

George Asamoah's amazing performance against RTU saw him get awarded as the best player in their game. However a perfectly dispatched spot kick by David Abagna cancelled Great Olympics lead, denying them a opening match victory.