Ghana vs South Africa: Andre Ayew"s penalty kick helps Ghana advance to the next round of WCQ

By bryntguggisberg (self media writer) | 2 months ago

After beating South Africa 1-0 on Sunday, Ghana advances to the next qualifying round of the 2022 World Cup in Qatar. 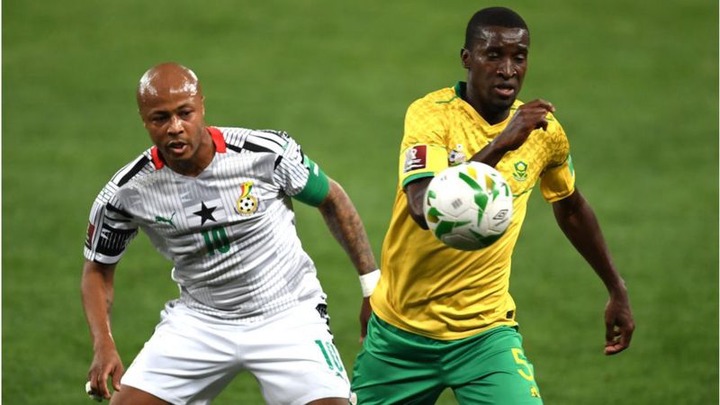 Andre Ayew's penalty kick in the first half proved to be Ghana's top decisive goal in Group G.

Since 2009, Ghana has never lost a game at the Cape Coast Stadium. They topped the list with 13 points, the same points as South Africa. But they got a better scoring record.

Ghana joins Mali, Egypt, Senegal, Morocco and the Democratic Republic of Congo as Contres advances to the next round as the group champion.

The next round will see 10 group winners face each other, but only 5 will advance to the next 2022 World Cup.

How the game was started;

Two teams on the field for the national anthem

The captains ended with the official duties of the match.

The Referee whistles to start the game

01 ’A good start from the Black Stars. A corner start, but the ball was poorly delivered, South Africa clarified its lines

05'Jordan Ayew wins a penalty kick for the Black Stars

06 ’Muhammed Kudus sends the ball to the roof of the net. Impact of the target

08 ’Idris Baba with a shot, but leaves the target

CHANCE 09: South Africa is almost in goal, but with good salvation from Jojo Wallaco

10 'Caring for injuries when Muhammad Kudus is injured.

15 ’What a failure from Daniel Kofi Kiera when he blows the ball off the target. Midfielder St. Pauli met with the goalkeeper

Second half is running

68' Percy Tau has a long shot saved by Jojo Wollacot.

69' Kamaldeen Sulemana defeated his mark and entered the penalty area, but tried to find the top of the net. Goal kick

Pressure from Bafana Bafana as an equalizer

78' Big mistake: Kamaldeen Sulemana tried to find the empty net from 45 yards, but his efforts went off target

FT: Everything at the Cape Coast Stadium is over. The Black Star team defeated the South African team to get tickets for the play-offs.

What must happen for Barcelona to be able to sign Morata