The EPL is in its early days though, but of course, you can tell from the matches played so far, which teams are going to be a force to reckon with and which teams are just going to make up the numbers, without making any impact.

The season so far has been good, and not far from what has been expected, except a few instances where there have been disappointments and surprise performances like that of Manchester United and Brentford respectively.

But in all, this season is expected to be an exciting one, with teams like Liverpool, Manchester City, Chelsea and Leicester City all showing some muscle to prove that they are real title contenders. 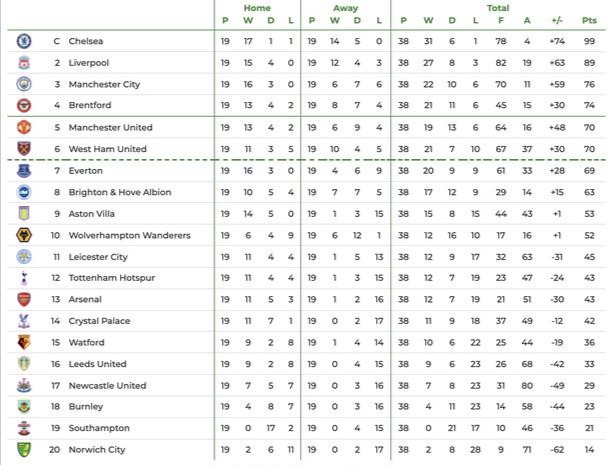 Usually, at the beginning of every season, there are various ways the table standing are predicted at end of the season. Some are based on past seasons performance, while others are based on current form.

For this season, a super computer has gone to the length of predicting which team will win the league.

Per the predictions, Chelsea will be the title holders with 99 points, followed by Liverpool, Manchester City and Brentford with 89,76 and 74 points respectively.

For now, we can only tell what will actually be the table standings at the end of the season.