Hakim Ziyech opened the scoreline later in the second half but believes his partnership with Kai Havertz and Timo Werner could have led to an earlier goal. 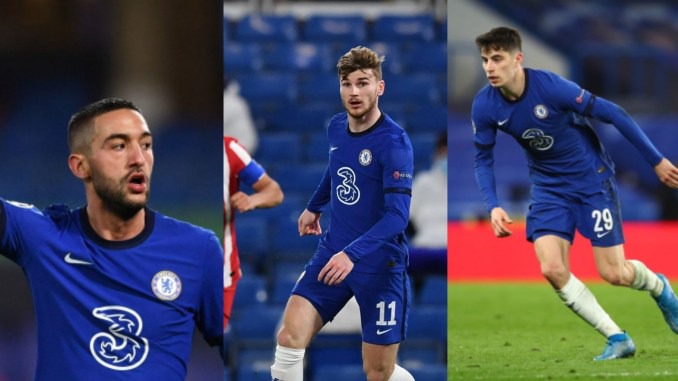 Both sides ended the first 45 minutes without a goal but the second half presented a combo of Werner and Ziyech striking home the opening goal to separate the two sides.

The switch saw Werner as the central forward while Havertz and Ziyech provided him with the desired support.

Speaking after the game, Ziyech spoke of his partnership with the Germans and how they managed to exploit Atletico Madrid’s defense.

‘It was an important goal and I had to wait a long time for it,’ he reflected after the game.

‘We took the ball well in midfield and we used it in space and it was a good delivery and it was a good finish. It is always a good feeling when you go 1-0 in front and especially when you score it yourself, and the delivery for Timo was good and the pass from Kai before as well.

‘It was a good counter-attack and we knew for our game there was a bit more space and there was calmness in our game, and it came at a good moment.’

Speaking of his combo with the Germans that led to a save from Oblak, Ziyech continued; ‘Kai and me, we know Timo’s game and try to use him in the space because we know he is really fast, and we did it well in this game.

There were some difficult moments in the game but most of the time we had it under control. It was a little bit like seeing how the game would go in the first 10 minutes and then after 10 minutes we had the control and played our game and we did well.’

It is a big win, an important win, and I think at this moment everybody in the world who supports Chelsea is happy.’

Chelsea are through into the Quarter finals and are of course the side no one would want to be matched against just like Tuchel stated during his early days.

‘We are in a good way and we need to keep improving and play like this, and I am sure then it will be a good season,’ Ziyech said.

‘In Champions League you never know what can happen. The most important thing is we all know we give our best in all the rounds and every game we play, and that is the only thing we can do. In the end we will see but of course if you are still in it, you have to try to go forward and that is what we do.’