Photo that proves that Chelsea are winning the champions league this season – Read full article.

Ahead of the finals of the Champions league game between Chelsea and Manchester City, some fans of the Blues have shown an unprecedented act to mark the all English finals.

It is obvious that fans of both sides would optimistically be expecting their respective club to win the cup at all cost. Meanwhile there are much expected from any one of the two teams who might win the clash.

Despite all this, some Chelsea fans have shown how serious they are for the club to win this year's champions league. These fans have declared a 7-day fasting with serious prayers for the team to win the against Man City.

On the banner which they made to mark the program, it says all fans should desist from sex 10 days prior to the game.

The theme for the fasting and prayer session is dabbed, "O LORD OPPOSE THIS WHO OPPOSE CHELSEA FC WE ARE AT WAR WITH THE CITY OF MEN OF DARKNESS! LORD FIGHT FOR CHELSEA ON 29TH OF MAY 2021”.

Other elements that was identified on the banner was a photo of representing the Cup, a Chelsea flag, and a photo of a pastor with a pulpit.

There was another bold writing which reads, "THE CUP IS OURS!!!"

There banner also listed some prayer points to be undertaken through the session. Topics for the prayers includes:

2. Let Their Goalkeeper Be Confused As Liverpool First Eleven.

3. Let Their Defense Be As Useless As Man United Tuanzebe.

The prayer was to commence on May 18 through May 29 where the game shall come off. 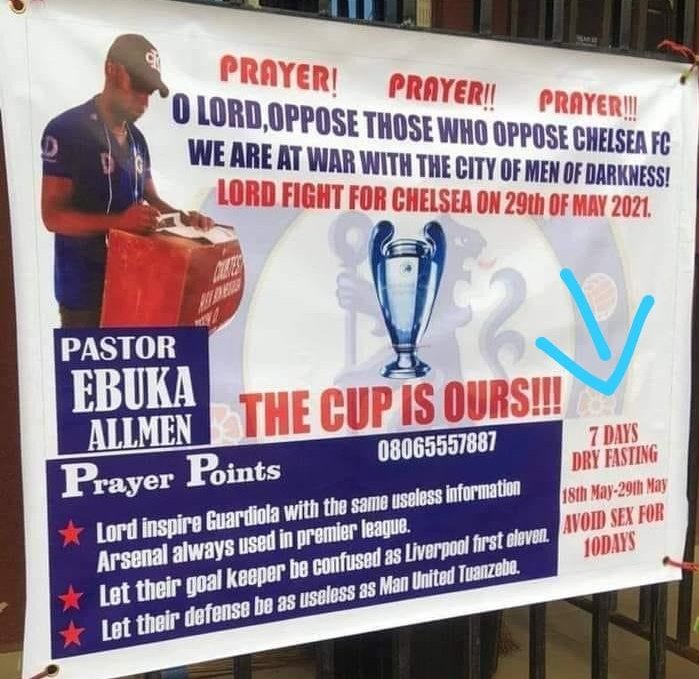 Meanwhile Man City had earlier on established that they are on they are optimistic to winning the Cup despite how tough the Blues may be.

"It’s taken a monumental effort from a magnificent set of footballers and a wonderful manager and backroom staff who have gone above and beyond this season to keep us entertained through an incredibly challenging year.

"Now, we have a chance to lift the most coveted trophy in club football, though Chelsea represent a formidable hurdle.

"It would be the perfect end to an unforgettable season when football has kept so many people’s spirits up, but whatever happens on May 29, it is an amazing achievement by Pep and his players”, curb from Manchester City Official Twitter page.

Mark It: You Will Never Have Our Votes Again - Haruna Iddrisu boldly speaks out