The KGL Foundation and the GFA have teamed up to support grassroots football development.

By KwameAsareBoadu (self media writer) | 1 month ago 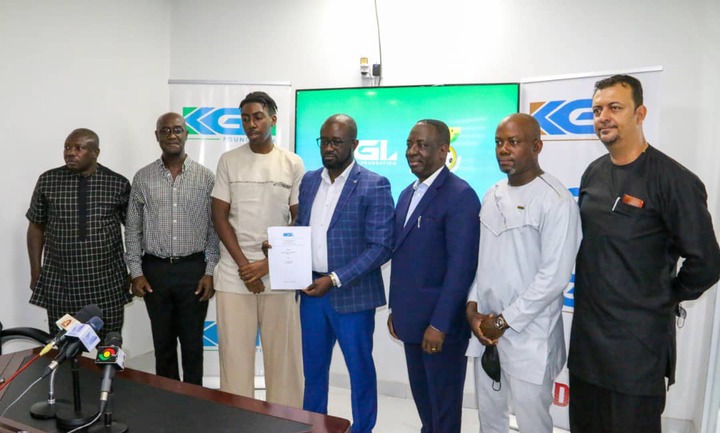 The KGL Foundation, a subsidiary of the KGL Group, has stepped in to support the Ghana Football Association's juvenile football development program (GFA).

Mr. Alex Dadey, Executive Chairman of the KGL Group, stated at the agreement signing ceremony that the KGL Foundation was established as a single-purpose vehicle to drive all KGL Group corporate social responsibility operations in compliance with international standards and best practices.

Mr. Alex Dadey reaffirmed that the KGL Group and its subsidiaries' ultimate purpose is to build strong strategic corporate ties and community development.

collaborations with organizations and institutions that share common interests in environmental sustainability, sports development, tourism, education, and health. He also highlighted that the KGL Group has supported sports development through sponsorship of the Ghana Black Stars and, more recently, the Kokrokoo Charity Foundation, among other social intervention programs, through the group's CSR arm, the KGL Foundation.

Mr. Elliot Dadey, CEO of the KGL Foundation, stated that the Foundation has granted a special annual sponsorship package worth $150,000 over the next five years as part of its key principle of corporate social responsibility and accountability.

is aimed at assisting the GFA in developing grass-roots football. As part of its broader commitment to assist education and local sports development, the KGL Foundation will also grant scholarships to select young players competing in juvenile football contests, according to him.

Mr Kurt Edwin Simeon-Okraku, President of the Ghana Football Association (GFA), discussed the role and necessity of discovering and cultivating local potential for national sports in his remarks. He explained that this rationale prompted the creation of the Juvenile Football League with the goal of discovering and grooming young gifted footballers from all around the world.

Mr. Kurt Okraku, in his closing remarks, expressed the GFA's gratitude to all stakeholders for their cooperation and shared vision for the development of local football.

The Ghana Football Association (GFA) and the KGL Foundation signed an agreement on behalf of the KGL Group at the current headquarters.

KGL Group is a company based in the United States.

The KGL Group has been in the forefront of driving digitization across all sectors of the Ghanaian economy through its operational wings, KGL Technology Limited, Keed Ghana Limited, and KGL Foundation.