By adsamuel (self media writer) | 10 months ago

Leo Messi: “I’m really sad because I didn’t want to leave this club. I love Barcelona and I wanted to stay, my contract was ready. I did everything in my possibility to stay”. Leo Messi weeps. 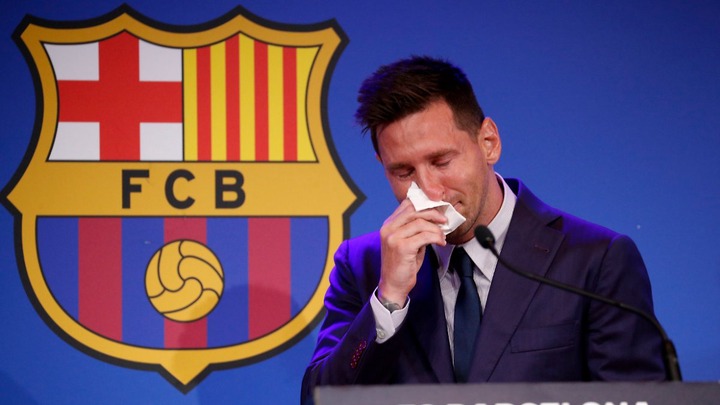 Barcelona secured a winning end to their 2021/22 preseason campaign with a 3-0 victory over Juventus.

Gareth Bale would have been hoping for a low key return to Real Madrid ahead of the 2021/22 La Liga season. Alongside the frustration of missing a key chance, Bale was also required to pull on the unfamiliar No.50 jersey for the game.

Andy Robertson has provided more Premier League assists than any other defender since he joined Liverpool (35).

Barcelona star Gerard Pique has given a frank response to Lionel Messi‘s confirmed exit from the club. “The team is a bit broken because of Messi’s departure, and we will lose magic in attack, but we have to move forward as the fans expect a lot”. “We’ve lost the best player of all time and it hurts us all. “I don’t know the whole story, the two parties have said it was a matter of numbers, but the management of previous years has not helped.”

When he was asked if their Community Shield defeat underlined Manchester City's need to sign a striker, Pep Guardiola's reply was: "No."

With his £97.5m move to Chelsea nearly complete, Romelu Lukaku will have the highest accumulated transfer fees of any player in football history.

Barcelona boss Ronald Koeman has issued a confident message to fans ahead of their 2021/22 La Liga campaign. “Despite the farewell to Leo Messi, we are very excited about this new season” “With the squad we have, the signings we’ve made and the young players coming through, they are always the future of this great club.”

Tottenham boss Nuno Espirito Santo will hold talks with England striker Harry Kane on Monday to try to convince the 28-year-old to stay at Spurs, amid interest from Manchester City.

Arsenal are ready to make a move for Atletico Madrid defender Kieran Trippier as Manchester United have been unable to agree a fee with the Spanish champions for the 30-year-old England international.

Manchester United are willing to sell France forward Anthony Martial, 25, for £50m with Inter Milan keen to sign him to replace 28-year-old Belgium striker Romelu Lukaku, who is close to joining Chelsea.

Leicester City could recommence their pursuit of Southampton defender Jannik Vestergaard, 29, as cover for injured Wesley Fofana. West Ham have also been linked with the Dane.

Milan and Chelsea could meet next week to discuss a possible move for Tiemoue Bakayoko, according to Tuttosport.

Arsenal are in competition with Tottenham for the signature of Fiorentina's Serbia striker Dusan Vlahovic, with Spurs keen on the 21-year-old as a possible replacement for Harry Kane.

Milan are reportedly ready to give Simon Kjaer an increased salary to tie the Dane down to a two-year deal at San Siro.

As expected, Inter’s pre-season friendly against Parma turned into an opportunity for the fans to insult their club owners over the Romelu Lukaku sale to Chelsea, even waving money at them.The game was at the Stadio Tardini this evening and circa 500 supporters were in attendance.

Matias Viña is ‘pleased to be coached by a top manager’ like Jose Mourinho after completing his transfer to Roma. ‘I’m raring to go.’ The left-back arrives as a replacement for Leonardo Spinazzola, who will be out for several months after tearing his Achilles tendon during Italy’s triumphant UEFA EURO 2020 experience.

Paris Saint-Germain are eager to distance themselves from Manchester United midfielder Paul Pogba as they look to land Lionel Messi.

Manchester City presented the FA with a full-sized replica of the 1896-1910 FA Cup at Saturday's Community Shield.

Manchester City will closely monitor Kevin De Bruyne's fitness after the Belgian reported for pre-season still feeling pain in the ankle that he damaged in the European Championship finals.

Four-time African Footballer of the Year Samuel Eto’o has urged Lionel Messi not to cry about his departure from Barcelona after he "gave his all" for the club.

Atletico Madrid boss Diego Simeone ran onto the pitch to confront Yannick Carrasco following the Belgian's red card during their 2-1 friendly defeat against Feyenoord on Sunday.

Jurgen Klopp has hinted that Liverpool will look to make further signings before the transfer window closes.

Liverpool's hopes of adding to their squad this summer ahead of the new season could rely on them selling two first team players.

Marseille's thrilling comeback win at Montpellier on the opening weekend of the Ligue 1 campaign was marred by crowd trouble.

Manchester City are reportedly preparing to offer Bernardo Silva to Tottenham Hotspur as a makeweight in a potential deal for Harry Kane.

England will raise the possibility of postponing this winter's Ashes series unless guarantees about quarantine exemptions for players' families can be given when they hold talks with Cricket Australia this month.

Paris Saint-Germain's contract offer to Lionel Messi is reportedly worth €40m (£34m) a year after tax.

During the 10th minute of the Barca-Juve game, fans took the opportunity to chant Messi, Messi as the Barca beat Ronaldo's Juve team mercilessly.