Welcome to World Class: Varane to Man United, Kane to City, Mbappe to Madrid and many more updates.

By allround.news (self meida writer) | 28 days

📌📌Belgium must be braver to beat Italy in the quarter-finals, says Witsel.

📌📌'We have great respect for Lukaku' says Chiellini.

📌📌Juventus have 'no signal from Ronaldo' that he wants to leave.

📌📌Inter Miami pull out of Willian transfer over wage demands.

🔰🔰Roberto Martinez hints Kevin de Bruyne and Eden Hazard could play for Belgium in Friday's Euro 2020 quarter-final with Italy despite not returning to training after picking up ankle and hamstring injuries against Portugal.

🔰🔰Axel Witsel has admitted that Belgium "stopped playing" in the final twenty minutes against Portugal, and says they will have to be braver to beat Italy in the Euro 2020 quarter-finals.

🔰🔰Gareth Southgate is a "brilliant man-manager", according to Jack Grealish, who has insisted that he has a "great relationship" with the England boss.

🔰🔰Xherdan Shaqiri will captain Switzerland in the absence of the suspended Granit Xhaka against Spain — but the Liverpool forward has been forced to defend his own contribution.

🔰🔰Gary Neville believes England will revert back to four in defence and recall Phil Foden and Mason Mount to the starting XI for their Euro 2020 quarter-final clash with Ukraine - but will still leave Jack Grealish on the bench.

🔰🔰Roberto Mancini in his pre-match press conference on whether Federico Chiesa will start today: "I have few doubts on the formation, there are choices to be made but we already have a good idea. It doesn't change much, both him and Berardi have done well."

🔰🔰According to Sky Sport Italia, Francesco Acerbi could start over Giorgio Chiellini today.

🔰🔰Nicolò Zaniolo, interviewed in Gazzetta dello Sport, on whether Italy can go all the way at the Euros: "I won't say anything, since we saw what happened to France who are World Cup winners. But at this stage, which team wouldn't be afraid of facing Italy? I think none of them."

🔰🔰José Mourinho predicts Italy will win against Belgium but adds: 'I have to say so, otherwise they are going to kill me today.'

🔰🔰Alexis Sanchez is reportedly open to lowering his yearly salary at Inter Milan and sign a new contract until June 2024.

🔰🔰José Mourinho is ready to begin his tenure at Roma and fly to the Capital from Portugal today.

🔰🔰Sandro Tonali is reportedly close to completing a permanent move to Milan, while Tommaso Pobega and Jens-Petter Hauge are set to leave the Rossoneri.

🔰🔰New Juventus sporting director Federico Cherubini has stressed that Cristiano Ronaldo has not expressed any intention to leave the Old Lady this summer.

🔰🔰Sergio Ramos has accepted a 2-year contract proposal from PSG. The 35-year-old has rejected two offers from the Premier League and is expected to undergo a medical in the coming days.

🔰🔰Talks progressing positively between PSG and Everton over another season-long loan for Moise Kean, according to Saber Desfa.

🔰🔰Emmanuel Macron pushed for the return of Karim Benzema in the French national team, according to Romain Molina.

🔰🔰Jose Mourinho has hit out at France after their Euro 2020 exit to Switzerland by saying they celebrated the prospect of beating their opponents too early after Paul Pogba's goal.

🔰🔰Spain face Switzerland in the Euro 2020 quarter-finals on Friday and Luis Enrique is confident that none of the other seven teams still in the tournament are superior to La Roja.

🔰🔰Xavi Hernandez has stated that Luis Enrique's decision not to include Real Madrid players in the Spain squad at Euro 2020 has been a direct cause of the criticism that his side have received.

🔰🔰Madrid's 17th Commerical Court has filed a new order, and told UEFA to withdraw any fines against all European Super League clubs.

🔰🔰Firpo will travel to the United Kingdom this weekend to seal his signing for Leeds. Barcelona will receive 15 million euros + variables.

🔰🔰Raphaël Varane won't take a decision on his future until after his 3 week holiday and a talk with Carlo Ancelotti. PSG Sporting Director Leonardo has spoken with his camp, Manchester United have made him their priority, Chelsea also interested.

🔰🔰Joan Laporta will this Friday travel to Madrid to meet La Liga president Javier Tebas about Lionel Messi’s future according to Diario AS.

🔰🔰Real Madrid are on the verge of announcing a new deal for Nacho Fernández until 2023, according to Madrid-based journalist Miguel Ángel Díaz.

🔰🔰Manchester United move closer to signing Real Madrid defender Raphaël Varane - United confident that deal can be done for a fee in the region of €50 million.

🔰🔰The European Court of Justice will give a final ruling over the Super League vs UEFA case between October and December 2021.

🔰🔰English clubs offered Ramos more money than PSG, but his heart was set on the Paris move, according to French journalist mohamed bouhafsi.

🔰🔰Kylian Mbappé will stay at Paris Saint-Germain until 2022. He will not leave this summer, according to Le parisien.

🔰🔰Gareth Bale will meet with Ancelotti in the next few days to decide his future. The situation is still open.

📋📋Manchester United have confirmed the imminent arrival of England forward Jadon Sancho in a £73million switch from Borussia Dortmund.

📋📋Manchester City are said to be "seriously interested" in landing Leicester defender Caglar Soyuncu this summer amid reports of a defensive reshuffle.

📋📋Manchester United are reportedly set to offer Bruno Fernandes a new contract extension at Old Trafford, it will be officially announced this month.

📋📋David Beckham's Inter Miami have 'pulled out of a deal to sign Willian after the Arsenal star demanded wages of £167,000-a-week... more than double that of top earner Gonzalo Higuain.'

📋📋Arsenal outcast Matteo Guendouzi is reportedly closing in on a return to France with Marseille set to sign him on the cheap.

📋📋Real Madrid are interested in signing Diogo Dalot from Manchester United, according to reports in Spain.

📋📋Liverpool are keeping tabs on Brighton midfielder and Malian international Yves Bissouma, according to a report in the Liverpool Echo.

📋📋Tottenham boss Nuno Espirito Santo has been given assurances by club chairman Levy that he will not accept any bids for Harry Kane below the valuation of £150million.

📋📋Cristiano Ronaldo has not told Juventus that he wants to leave the club this summer, according to their sporting director Federico Cherubini.

📋📋Everton have announced that work on their new £500million stadium at the Bramley-Moore dock site in Liverpool will begin on July 26.

📋📋Cesc Fabregas believes Harry Kane would be the perfect replacement for Karim Benzema at Real Madrid and insists he has the right mentality to deal with the pressure of playing for the Spanish giants.

📋📋Chelsea have been given a huge boost in their pursuit of Declan Rice amid claims he rejected two contract offers from West Ham.

📋📋Benfica left-back Nuno Tavares was set to travel to London on Friday ahead of completing his transfer to Arsenal.

📋📋Hector Bellerin looks set to leave Arsenal this summer and Serie A champions Inter are monitoring his future.

📋📋Billy Gilmour is expected to join Norwich on loan from Chelsea on loan until June 2022, official announcement expected soon. 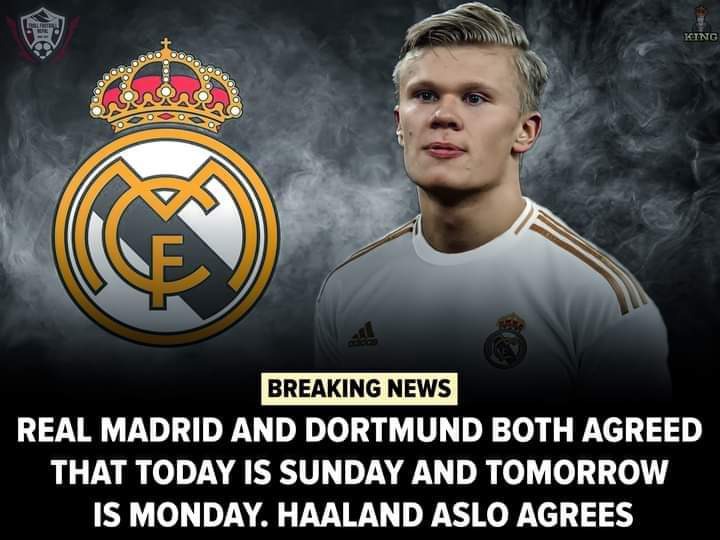