By Africamedia.gh (self meida writer) | 24 days 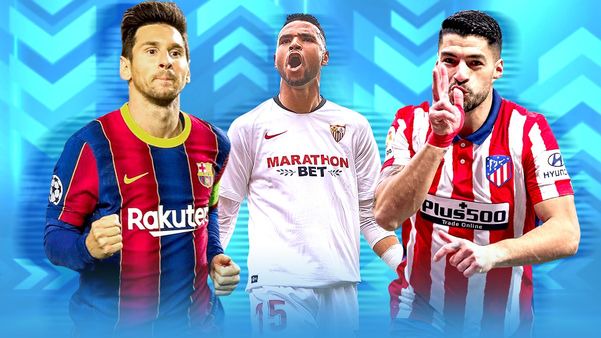 Simply the best to ever play in La Liga. The little Argentine normalises brilliance and continues to perform at a ridiculously high level even into his 30s.

The Swedish striker enjoyed the most prolific season yet of his young career, netting 17 times, a total bettered by only five other players. Spearheading an exciting Real Sociedad side, Isak’s goals helped the Basque side to fifth place.

Another great season for Aspas, with the Spaniard carrying Celta to the brink of European football, despite narrowly avoiding relegation the season before.

A second La Liga title for Simeone, and fully deserved as his side led from start to finish. With captain Koke the only survivor from the 2013/14 success, Simeone has shown his ability to construct another title-winning team in the 2020/21 season.

Deemed surplus to requirements at Barcelona, Suárez made sure they regretted it by firing Atlético to the title. His 21 strikes were worth their weight in gold as they won his side 21 points.

Pjanic was signed as part of a convoluted swap deal involving Arthur joining Juventus as Barcelona desperately tried to ease their financial crisis. But it seems, he is not the choice of the Barcelona head coach starting eleven.

Arguably the best goalkeeper in world football and certainly the best in Spain. Accordingly, Oblak won his fifth Zamora Trophy in six years, with a league-high 18 clean sheets this season. The ‘Oblaktopus’ recorded the most saves (103) in La Liga and had the highest save percentage in the division (80%).

Another stellar campaign at the heart of the Sevilla defence from the Frenchman. In fact, his emergence is perhaps the reason Deschamps was comfortable enough to allow Aymeric Laporte to switch his international allegiances to Spain.

Karim Benzema was the only player to score more goals. Only Benzema and Kroos had more combined goals and assists but Casemiro has done a lot that has helped the Real Madrid team to finished on second position.

A case could be made for Gerard Moreno or Karim Benzema, both outstanding for Villarreal and Real Madrid respectively. Unfortunately, Messi has a stranglehold on this award.

11. Goal of the Season: Kenedy (Granada vs Villarreal).

A stunning strike from Newcastle legend Kenedy, as he leaves two Villarreal players on their backsides before thumping the ball into the top corner past a helpless Sergio Asenjo.

Signed from Las Palmas at just 16, Pedri has exceeded all expectations by establishing himself in the first team just a year later.

15. Controversy of the Season: Mouctar Diakhaby (Valencia vs Cádiz).

I could award this to the VAR situation between Sevilla and Real Madrid, where in the 78th minute Sevilla were awarded a penalty for a handball by Militao rather than Real Madrid being awarded one at the other end for Benzema being floored by Bounou.

Lionel Messi and Karim Benzema are on this list.There ends the list of players involved in more goals this season than Villarreal’s Gerard Moreno. A direct contributor to 51% of his side’s goals, the Spaniard has been sensational in 2020/21.

A cracking game at the Ciutat de Valencia ended with Barcelona’s title hopes in tatters. The Catalan side threw away 2-0 and 3-2 leads to a Levante side who made a habit out of upsetting La Liga’s elite this season.

Betis actually twice overturned a two goal deficit, but the recovery at Balaídos on the final day ensured Europa League football for the Andalusians.

As much as I would love to award this to Sevilla goalkeeper Bounou for his last-gasp equaliser against Real Valladolid, it has to go to ‘el Pistolero’.

Gareth Southgate has undoubtedly had many sleepless nights wondering which of his plethora of right-backs to leave at home for the European Championship, but Trippier did the necessary job to satisfied the England national team coach.