Official Premier league team of the season has been released. Chelsea received a shock

By Raysportz (self meida writer) | 18 days

After a long and exciting season of the Premier league, PFA has released their premier league tefm of the season with most players coming from the premier league champions; Manchester City.

The golden gloves winner, Ederson was chosen as the best goalkeeper of the premier league this season. He kept 16 clean sheets in the entire season going above Edouard Mendy and Martinez of Aston Villa.

Luke Shaw undoubtedly had a nice season. He was one of the most improved players of Manchester United this season. He was picked alongside Cancelo, John stones and Ruben Dias in defence. These three Manchester city defenders were on top of their games throughout the season making it difficult for opponents to break through the defence. 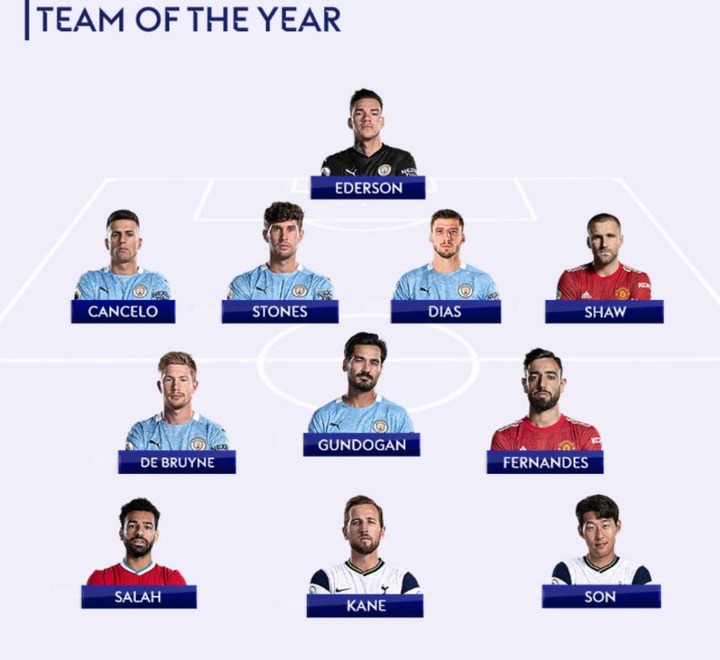 Ikay Gundogan, De Bruyne and Bruno Fernandes filled up the midfield. Gundogan came on form from January after de Bruyne got injured carrying the whole team on his shoulders. Fernandes contributed alot to Manchester United as they were runner up of the season.

Son Heung-Min, Salah and Kane were the best forwards in the season. Kane topped most goals scored by a player and also most assist of a single player in the Premier league season.

Chelsea received a shock as none of their players were included in the team.