Top 10 Players of the 21st Century Based on Career Wins: Xavi, Messi, CR7, and Giggs

By KingsNews (self media writer) | 3 months ago

The most important aspect of football is winning games, which can only be accomplished by scoring goals and winning games. Football is all about scoring goals. Some players have, throughout the course of their careers, found a way to help their teams win a significant number of games on a regular basis. 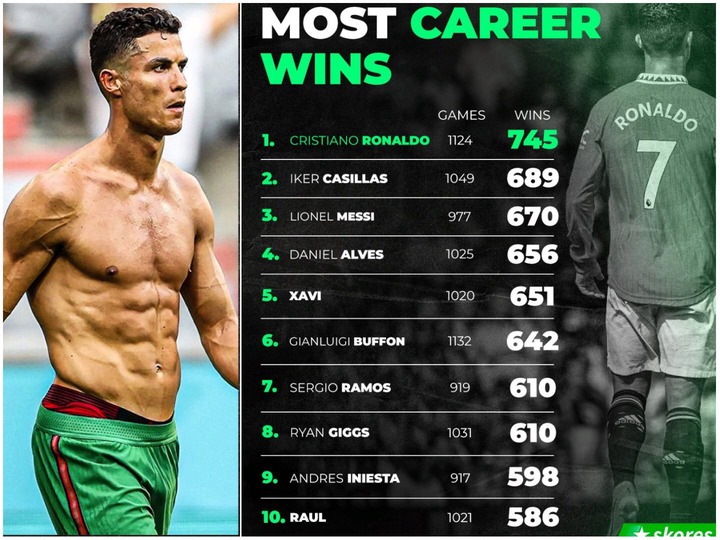 There have been a number of players in the 21st century who have made it a habit to win games, and no player better exemplifies this trend than the standout player for Manchester United, Cristiano Ronaldo.

The 37-year-old player is widely considered to be among the very finest players of all time and is now ranked as one of the best in the world. His winning attitude and the many trophies he has amassed over the course of his career make him stand out. The Portuguese superstar has played a total of 1125 games throughout his career, and he has won 746 of those matches, making him a player who is known for coming up big for his club in crucial moments when they are desperately in need of him. His most recent victory came for Manchester United in the English Premier League versus Liverpool, when they prevailed by a score of 2-1.

Iker Casillas, a legendary goalkeeper for Real Madrid, comes in at number two on the list. The player that won the World Cup and has since retired had a career record of 689 wins in 1049 total games played before hanging up his cleats. Lionel Messi, a legend for Barcelona, is currently in second place. The Argentine great, who plays his football for Paris Saint-Germain at the moment, has amassed 671 victories throughout the course of his career, which has seen him compete in a total of 977 matches.

Without further ado, here are the top ten players in the 21st century who have the most wins over the course of their careers:

6. Gianluigi Buffon, winner of 642 games out of 1132 total appearances