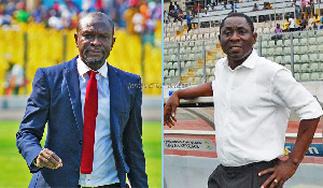 Having been appointed to lead the Senior National team Black Stars of Ghana, coach Charles Akonnor reserves the right to come out with any name that he thinks, is capable of serving diligently, as his lieutenant. That right cannot elude the former Asante Kotoko, AshantiGold and Dreams FC gaffer.

It is on this basis that it is believed, after assuming office, having served under coach Kwesi Appiah, Charles Akonnor opted for coach David Duncan as his henchman. The decision to execute his targets with a fellow local coach was embraced by incalculable Ghanaians, who either follow sports wholeheartedly or follow only Black Stars.

The duo have ground results to pull off an Afcon ticket, after which eyes have been set on World Cup ticket.

On Monday May 31, 2021, the Executive Committee of the Ghana Football Association, through a communique, approved the appointment of a second assistant coach for Black Stars, a move which was clearly recommended by head coach Charles Akonnor. The announcement sent tongues wagging, as questions began to pour in, from citizenry.

Does this appointment come as an indictment on the technical acumen of local coaches?

Divergent views have expressed in relation to Charles Akonnor’s decision to go for an expatriate assistant, in addition to coach David Duncan. Has Charles Akonnor sent unambiguous message to his local fellows that they are incapable of rendering a good service to him? In the wake of any eventuality such as untimely sacking, will Charles Akonnor court for the support of local coaches?

The greater expectations have been to go for another local coach as an assistant, if the need be.

Many have lauded the duo and anticipated, they will remain together till their contract runs out.

The decision may serve as a gentle reminder to what local coaches ought to do, if the Black Stars coaching role becomes vacant sooner than expected. Some may embark on a mission of silence, by not vouching for a colleague local coach.

Charles Akonnor had their support but same cannot be said post this appointment. The narrative is blown apart, henceforth.