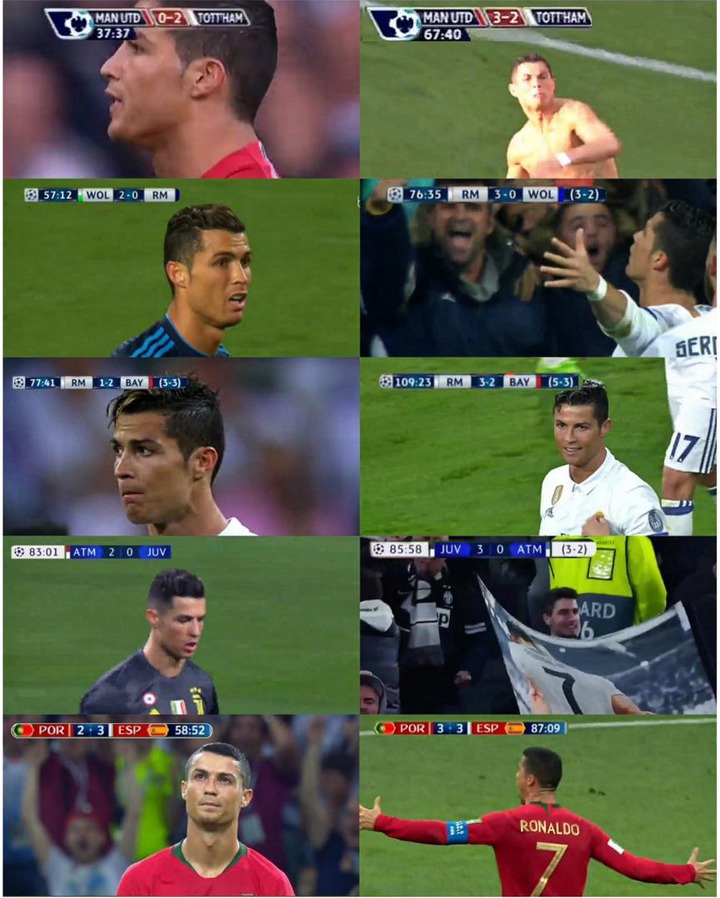 5. Back at Manchester United, Cristiano Ronaldo helped Manchester United to overturn a 2 goals deficit against Tottenham in 30 minutes netting the 3 goal to make it 3-2. It nearly became impossible but the Portuguese turned things round.

4. The moment of grace and praises. Real Madrid went 2-0 down in the first leg of the champions league knock out game against Wolvesburg but upon the second leg at Santiago Bernabao, Cristiano Ronaldo scored a hatrick to send Real Madrid to the quarter finals of the Champions League.

3. Another German club shaked a tree beyond their strength. Cristiano Ronaldo once again helped Real Madrid to eliminate Bayern Munich when Real Madrid was 2-1 down on the 77th minute but he turned things round in extra time.

2. Mr. Champions League they call him, he once again put the opposition into shame when Juventus lost first round 2-0 against ATM which was hard to believe that there could be an overturn yet the Portuguese netted another hatrick to overturn the deficit.

1. He is not only useful for his clubs but also for the national team. Cristiano Ronaldo handled the Spanish national team by cancelling all their 4 goals scored. It was a match I believed David Degea came to an end due to the kind of goals he conceaded from the Portuguese. The match ended 3-3.

Indeed it is never easy when Cristiano Ronaldo is present.

Kindly follow my handle for more interesting articles and for your daily sports news.