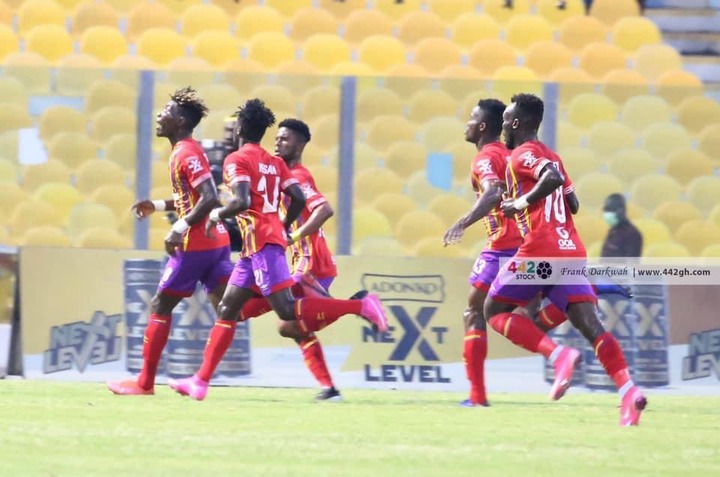 Ghana Premier League leaders Accra Hearts of Oak walloped lower-tier side Windy Professionals 4 - 1 to advance to the next stage of this season’s FA Cup.

Accra Hearts of Oak are through to the round of 16 stage.

Both teams started to make their chances count the moment the whistle went for kick off.

Hearts of Oak combined passes to arrive in the final third but ball went off line for a corner kick, which the resulting kick was headed wide by Benjamin Afutu Kotey.

5th minutes, Windy Professionals had their out but Bawa was brought, but the free kick soared high.

Accra Hearts of Oak responded with a quick break, which fell the way of Kojo Obeng Junior and Patrick Razak, but the latter misdirected the ball as the score stand goalless.

Daniel Afriyie Barnieh was put through by Kojo Obeng Junior but the final delivery was saved by goalkeeper Abubakar Sowah of Windy Professionals.

Following a fouls on Ola Selorm, Windy Professionals had the chance to score via free kick but the human wall took charge of it.

Frederick Ansah Botchway released William Dankyi, who turned ball to Daniel Afriyie Barnieh who was just a whisker from the opener.

On the half hour mark, Daniel Afriyie Barnieh after a full speed found Patrick Razak but his volley was high.

On the bring of 45th minutes, Windy Professionals has a free kick, but Yusif Abubakar sent it high.

Accra Hearts of Oak lavished over 7 goal bound chances to end the first half goalless.

Accra Hearts of Oak went into the second half with same winning mentality, as they kept pushing through the lines.

6 minutes later, Kojo Obeng ran on the left and flighted a ball for Daniel Afriyie Barnieh, who beat his marker to find the back of the net.

Emmanuel Nettey will later make it 2 - 0 for Hearts after he was out set up by Daniel Afriyie Barnieh.

Windy Professionals bounced back and reduced the deficit following a poor clearance by Hearts defence.

With 2 - 1 lead, Accra Hearts of Oak kept the push for goals, as Benjamin Afutu Kotey over jumped to head home the third goal.

As they lead 3 - 1, Fatawu Mohammed unleashed a low cross which was connected by Abdul Manaf Umar to make it 4.

Accra Hearts of Oak and Windy Professionals kept exchanging passes to end the entire proceedings 4 - 1 for the former.