The world of football statistics has evolved rapidly over the past decade and continues to do so, but there are some statistics that continue to be used as a sign of high level performance without any great context.

Given the infrequency with which they are in possession of the ball, it's fair to say metrics measuring the performance of goalkeepers understandably remain relatively thin on the ground comparative to their outfield counterparts. We can count saves and sub-categorise into diving saves, saves that are caught and saves that are parried, as well good high claims from balls into the box or punches clear, but the staple statistic still used by most as the clearest indicator of excellence by many is clean sheets.

That's despite clean sheets being a statistic that really requires a higher level of context than most. After all, just how busy a goalkeeper is kept en route to a clean sheet is of great significance to truly understanding the impressiveness of said shutout.

It's pretty common knowledge that Ederson tops the clean sheet charts in Europe's top five leagues this season, with 15. However, as you'd expect, the Manchester City keeper has considerably less to do more often than not than the majority of his counterparts. Indeed, in general, there will always be a correlation between how many shots on target a goalkeeper faces and how frequently they keep clean sheets.

However, there are some clear outliers to that basic rule, and those are the players we have aimed to highlight as we take a dive into clean sheet statistics this season. For this study we have only looked into the goalkeepers that have kept a minimum of five clean sheets in their respective leagues, of which there are 67.

All in all there have been 661 clean sheets kept by goalkeepers in Europe's top five leagues at the time of writing, but as many as 72 of said clean sheets saw the goalkeeper in question fail to be forced into a single save. That's almost as frequent as goalkeepers being forced into five or more saves in order to keep a clean sheet (78 occasions), and equates to almost 11 per cent of all clean sheets. 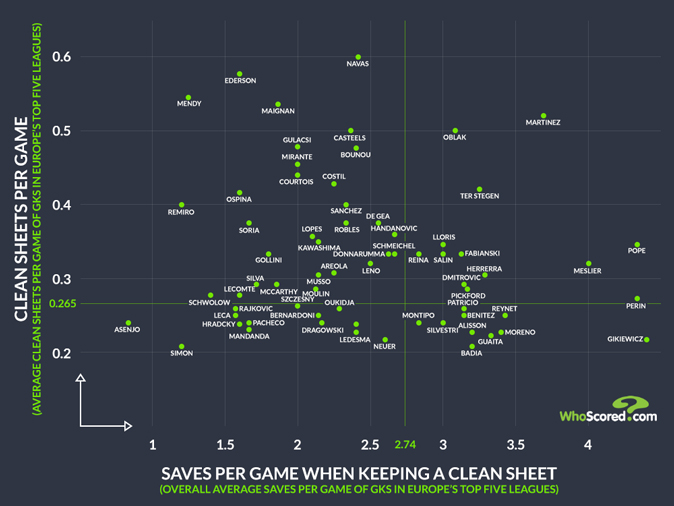 It makes sense to start with the aforementioned Ederson, who as mentioned leads the clean sheet charts along with Lille's Mike Maignan, with 15. In said matches, however, the Brazilian has had to produce just 24 saves (1.6 per game). For context, that's just two more saves than Augsburg's Rafal Gikiewicz has made on route to a third of the number of clean sheets (5), with 22 (or 4.4 per game). However, while the Pole leads the way for saves per game when keeping a clean sheet, he's kept a clean sheet in just 21.7 per cent of his appearances to Ederson's 57.7 per cent.

Amongst other keepers flying high in the clean sheet charts, Edouard Mendy is also an interesting subject. On the face of it, his 12 clean sheets from 23 appearances is incredibly impressive but in truth the Chelsea stopper has been extremely well protected. He's averaged a meagre 1.25 saves per game from said 12 matches. Indeed, the most common number of saves Mendy has made on route to a clean sheet is zero, having secured five in the league without producing a single stop.

This isn't to say that Ederson or Mendy don't deserve credit for keeping so many clean sheets - a goalkeeper can impact a defence in more ways than saves alone, not to mention that they can't produce saves if they don't face shots on target - but their tallies require context.

Instead, the more impressive clean sheet returns arguably belong to the goalkeepers that outperform both clean sheet and save averages on route to said clean sheet. Of the 67 goalkeepers analysed, just 13 have exceeded both averages, and of said 13 there are five that really standout.

Premier League pair Illan Meslier and Nick Pope do so based on an extremely high volume of saves per game (4 and 4.33) for their respective tallies of eight and nine Premier League clean sheets. Genoa's Mattia Perin deserves a mention too for matching Pope's 4.33 saves per game when keeping a clean sheet, but has done so in just six of 23 appearances by comparison. He is, however, one of just two keepers - along with Levante's Daniel Cardenas - to produce ten saves to deny an opponent (Verona) from finding the net.

Nevertheless, there are three big winners here, and for two in particular, they aren't keepers you would naturally expect to have been so busy. Barcelona obviously aren't the force they once were but Marc-Andre ter Stegen has been called into 3.25 saves per game across eight clean sheet earning appearances, showing his quality since returning from injury.

Meanwhile, Atletico's Jan Oblak has been called upon more than usual this season as Diego Simeone has looked to adopt a slightly more expansive approach. It's paid off to now, with Atleti top of La Liga ahead of the Madrid derby, with Oblak keeping 12 clean sheets despite being forced into 3.08 saves in said games, solidifying the opinion of many that the Slovenian is Europe's best shot stopper.

However, from a statistical standpoint this season, he certainly has a very clear adversary in Aston Villa's Emiliano Martinez. Only Ederson and Lille's Mike Maignan have kept more clean sheets than the Argentine this season, but the former Arsenal goalkeeper has been made to work significantly harder for his exceptional tally of 13 from 25 appearances.

Indeed, Martinez ranks among the top five keepers studied here for both clean sheets per game (0.52) and saves from said games (3.69 per game). Using Mendy's superior protection for context, Martinez has kept just one more clean sheet than the Chelsea keeper, but produced 48 saves in 13 games to Mendy's 15 in 12.

The Senegal international has undeniably had a huge impact on the Blues defence, and is one of four keepers with a better clean sheet to game ratio than Martinez, but the Villa man's return is unquestionably the more impressive. It is, in fact, the most impressive across Europe thus far.