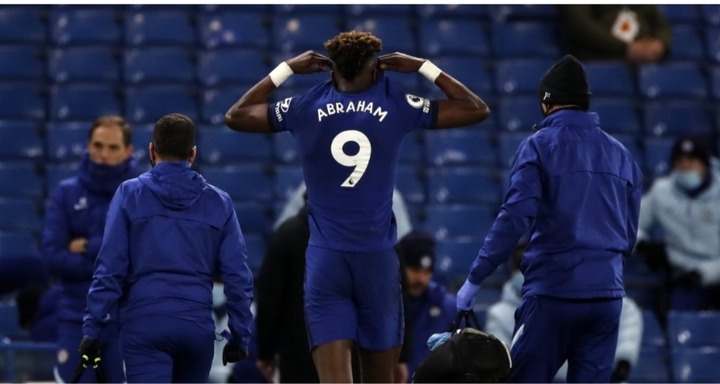 Stalling on contract talks, out of the squad altogether in a big match against Manchester United, and his club are chasing one of the best players in the world who happens to play in his position.

If you are Tammy Abraham right now, you will be considering your future at this club.

His contract is up in 2022, and there have been no signs of a renewal. There was talks less than a year ago, but since then it has been put on the back burner as Abraham wanted to keep his options open and monitor who else the club were looking to bring in.

And that man is Erling Haaland, which again, will only have a negative effect on Abraham’s decision to stay or go.

Yesterday, he was out of the squad entirely, and it wasn’t due to an injury.

“It was just a selection decision,” confirmed Thomas Tuchel after the game.

“It was about judging all the alternatives we have. We opted for Oli to begin with, and Timo on the bench. We had Kai who can play as a number 9.

“Things are a bit difficult for him [Abraham], not as easy as they should be. It’s not his fault and he will get our full support, it’s just a decision.”

I mean, what I take from this is basically Abraham is at the moment, 4th choice striker even behind Havertz. Which really says it all.

With Haaland, or another top class striker being targeted by the club this summer, I can only see Abraham hitting the exit door, especially if he refuses to sign a contract extension, this will be the last chance the club can get some good money for him.

It will be a real shame if Abraham left the club he has been at since he was a young kid, and I still think he brings a lot to this team.

But I also think that perhaps he just doesn’t have enough to be the main man at Chelsea, which is what he really wants to be.