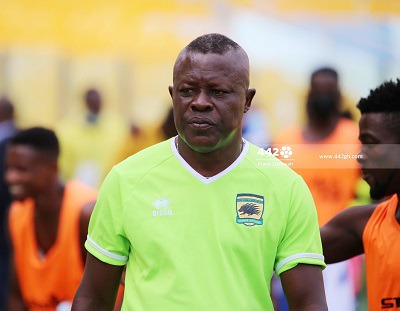 Coach Johnson Smith has blamed the Techiman pitch, as the major factor that prevented his side from picking up the three maximum points, in a week 18 fixture against Eleven Wonders yesterday.

In a post match monologue, assistant coach Johnson Smith believes his players did their best to win the game.

“The boys did well because for a longer period this is a first time in the second period”.

He however revealed that the pitch was the major cause of Asante Kotoko’s inability to go back with all points.

“And the pitch because when we are playing on our pitch come and see the way we play, is different from this pitch.”

He acknowledged, he came into the game with a formidable team but the pitch failed Asante Kotoko.

Both sides commenced the second round of the Ghana Premier League with a goal.

The Porcupine Warriors shot themselves into the lead courtesy Brazilian International Fabio Gama. The goal was a volley that was struck with precision. The goal marked the opening goal of Gama in the local league, after making his debut appearance against Medeama in Tarkwa, in the first round.

Asante Kotoko could not hold on to the lead as Samuel Boakye fetched the equalizer for Eleven Wonders, after connecting to a cross with his head.

Eleven wonders added the second but was ruled illegitimate.

Both teams kept the search for the winning goal alive, but ended up sharing honors in Techiman.

For Asante Kotoko, they now sit third on the league log with 28 points after 17 matches.

Eleven Wonders are 13th in the pecking order with 21 points after honoring 18 matches.

Asante Kotoko have an outstanding game against Bechem United. They will hope to win that encounter and make amends on the league table.