By Nana_Randy (self media writer) | 2 months ago 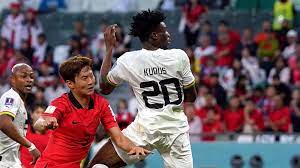 On November 28, 2022, Black Stars defeated South Korea in their second Group H match to get back on the winning track. Otto Addo's team earned their first 3 points of the FIFA World Cup 2022, thanks to a brace from Mohammed Kudus and another from Mohammed Salisu. The Black Stars had a shaky start to the game, but after the 21st minute the Black Stars took over and the team found its rhythm.

However, Jordan Ayew's chance from a free kick he won in South Korea's half led to the game's first goal on the 24 minutes into play.

With Mohammed Salisu swooped on the ball following Andre Ayew's close touch to open the scoring right in the penalty box.

After scoring against Switzerland in a pre-World Cup international friendly, the Southampton star now has two goals in his last three national team outings.

Jordan later assisted Mohammed Kudus, who was named man of the match after 90 minutes of action, in scoring the second goal of the match, which gave the Black Stars a commanding lead going into halftime.

With Tariq Lamptey trying to score his the third goal for Ghana after the break, Ghana appeared destined to maintain their lead. Even so, the South Korean goalkeeper, Seung-Gyu Kim, was in no danger from his effort.

South Korea scored two goals in a matter of seconds to tie the score, and it appeared that the same failed attempt from the Ghanaian defender, Tariq Lamptey, had been the turning point.

In addition to rising above Gideon Mensah three minutes later to score the equalizer, Gue-Sung Cho defeated Salisu to head past Lawrence Ati-Zigi to restore parity, all taking place within 3 minutes of regular time.

Whereas this appeared that the Black Stars had lost confidence, Gideon Mensah showed flashes of brilliance by driving forward and cutting back for Inaki Williams. Williams was unable to score, but Mohammed Kudus was right on point and scrunched the ball past the Seung-Gyu Kim, the South Korean goalkeeper, to give Ghana the lead once again.

Ghana won the match 3-2, giving them a crucial victory in Group H despite the Korean opponents late attempts.

In order to advance to the competition's knockout round, Otto Addo's team will now play Uruguay in their final group stages game on Friday, December 2, 2022 at Al Janoub Stadium (Al Wakrah) at 3PM GMT.

Content created and supplied by: Nana_Randy (via Opera News )