By Firstdaynews (self media writer) | 7 months ago

Watching a creative wizard on top, defence-splitting form is one of the great joys of the game and while goalscorers will always command the highest fees, if they don't have a partner in crime to assist them, their value is all but lost.

When you think of the top finishers in the game over recent years, the vast majority owe a great deal to one key playmaker within the side. Be it Lewandowski and Muller, Aguero and De Bruyne, Haaland and Sancho, Messi and, well, Messi - perhaps not the best example - every great goalscorer needs a source of inspiration.

As ever, there have been some standout performers in that regard this season, and a number of unsurprising inclusions in the top ten players for key passes this season. That man Lionel Messi, however, misses out by the narrowest of margins in 11th as we reveal the leaderboard, along with some key considerations when it comes to their mightily impressive tallies.

It's been somewhat of a breakthrough season for late bloomer Boulaya, highlighted by the fact that the 28-year-old made his international debut for Algeria late last year. A bit part player for Metz last season, Boulaya has been a star turn this time around, registering a modest five assists from 66 key passes. Set pieces do play a large part in his tally, with 56.1 per cent of his overall tally coming from open play, almost 20 per cent of his total key passes have created 'big chances', which is impressive.

One of the most underrated and consistent creators on the continent, Kostic has 11 assists to his name this season and is the key provider for Frankfurt goal-getter Andre Silva. His big chance creation percentage is the highest of the top ten here (26.5), with as many of 72.1 per cent of the chances he has created coming from open play.

Set to be one of the recurring names in the gossip columns this summer, De Paul was heavily linked to Leeds ahead of the season but the Whites will face even more competition this time around. The jewel in an otherwise uninspiring Udinese side, De Paul's modest five goal tally is a result of profligacy of teammates as opposed to the quality of chance he creates. Indeed, he's second to Kostic in terms of the proportion of his key passes which create big chances (25.7 per cent), but like Boulaya, is relatively reliant on set pieces, with just 57.1 per cent of his tally coming from open play.

While Mount's inclusion in the top ten is undeniably impressive, his 73 key passes require more context than most. That's because over half have come from set piece situations, with 47.9 per cent from open play. As such his big chance creation is inferior to the rest of the leaderboard, accounting for just 12.3 per cent of his total and going a substantial way to explaining a tally of just four assists.

While on the face of it De Bruyne and Mount have created the same number of chances in the Premier League, the make up and quality of their key passes are in stark contrast. Indeed, De Bruyne has created almost twice as many ‘big chances’, equating to 23.3 per cent of his total, while 74 per cent of his key passes have come from open play. As such, it’s little wonder the Belgian has 11 assists to his name by comparison.

As high as fifth in this leaderboard despite missing the last eight matches through injury, it’s little wonder Villa’s European push has subsided given what they are missing in their talismanic captain’s absence. A big chance creation percentage of 18.7 per cent is relatively modest but as much as 86.7 per cent of Grealish’s total key passes have come from open play, which is bettered by just one player on this leaderboard. 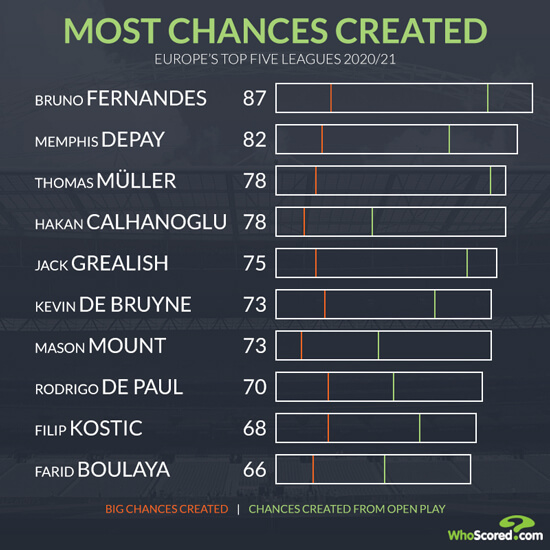 The most reliant player in the top ten on set piece duties, just 33 of of Calhanoglu’s key passes have come from open play (42.3 per cent). As one might expect, with so many chances created from dead ball situations, the quality of chances he creates suffer. Indeed, only 12.8 per cent of the Turkish international’s key pass tally were categorised as ‘big chances’ by Opta.

Another instance of two players on the same tally but with wildly different sources of their creativity, Muller is at the opposite end of the scale to Calhanoglu in that his tally is almost entirely made up of key passes from open play (73 – 93.6 per cent). That said, a relatively modest 17.9 per cent of the total chances Muller has created have been deemed clear cut, so it certainly helps to have a marksman like Robert Lewandowski to find, with the German registering a top five league-high of 16 assists thus far.

When you think of Memphis Depay you might not instantly think of the Dutchman being such a team player but for all his confidence in his own ability, the forward has an excellent understanding with his attacking counterparts at Lyon. He has created a high quality of chance in general, including 16 ‘big chances’ (19.5 per cent), and the majority have come from open play (72 per cent).

From one former United man to the current star of Old Trafford, Fernandes has set the Premier League alight ever since his arrival last year and continues to pull the strings for the Red Devils. While his detractors often point to his penalty duties as a main source of the Portugal international’s goals, he is far less reliant on set pieces when it comes to chance creation. Indeed, Fernandes has created 72 chances from open play, equating to 82.8 per cent of his total, while and excellent 21.8 per cent of his superb tally have been deemed clear cut chances.