Premier league team of the month released. Manchester city dominating with only one Chelsea player

By Raysportz (self meida writer) | 18 days

Its always an honour to be included in team of the week and month. It's very competitive especially in the English Premier league as every player tries to do his best on the field of play. This month has been a good month for some players especially Iheanacho of Leicester city as he broke into the eyes of fans.

In goalkeeping, Meslier has surprised the likes of Edouard Mendy of Chelsea and Ederson Moraes of Manchester city as both keepers did extremely well.

Only one Chelsea player was included in the team who is Andreas Christiansen in defence. Manchester United duo Wan Bisaka and Harry Maguire was added to him including Manchester city's Cancelo. 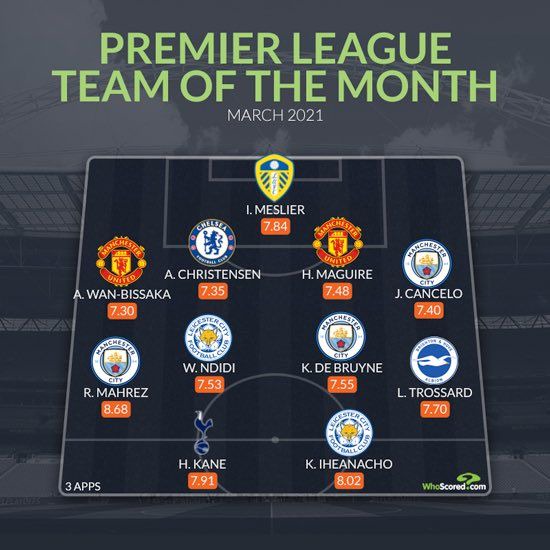 There is no doubt that Harry Kane was exceptional this month as banged he banged in goals and leading assists. He was paired with Iheanacho upfront.