What is Rodrygo's transfer value after Man City miracle? 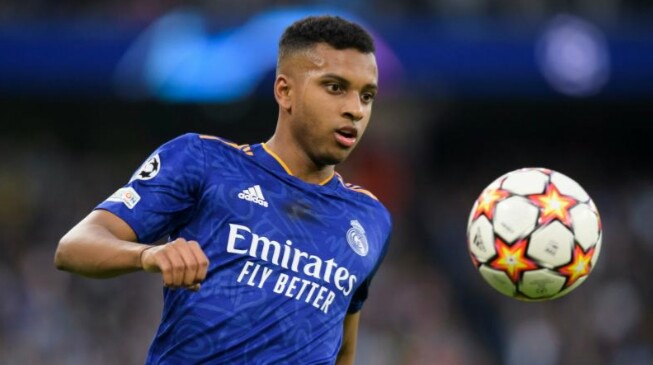 Rodrygo had perhaps his best performance of his career against Manchester City on Wednesday night, as his two late goals lifted Real Madrid to a 3-1 victory and a place in the Champions League final. The 21-year-old substituted replaced Toni Kroos in the 68th minute as Real Madrid pushed for a goal, and despite conceding first, Los Blancos were able to respond.

Rodrygo's overall season goal count increased to eight, which is his best-ever return for Real Madrid, surpassing his seven goals from 2019-20. He joined Real Madrid for €45 million from Santos in 2019, with the club betting on his long-term potential and expecting he may be the next great youth to shine at the club.

He followed in the footsteps of Vinicius Jr., who joined the club the previous year in the hopes of making an impact, and the two have now both played key roles in this campaign. Rodrygo hasn't quite reached the same heights as his countryman, but there is hope that he will in the coming years as they develop and gain more clout in the side.

Rodrygo has 17 goals in his Real Madrid career, and after his performance in the Champions League semi-final, the feeling is that his time has come, and he will be able to develop greatly.

What is Rodrygo's transfer value?

There has also been little interest in him from other clubs, as Real Madrid have been keen on keeping hold of him and seeing him have his best years at the Santiago Bernabeu.

Newcastle United was mentioned earlier this year as a possible destination for the Brazilian, with the Magpies apparently willing to spend up to £33 million (€39 million) for the player, according to the Mirror. However, such a move appears doubtful, with Newcastle relying on the likelihood of Kylian Mbappe moving to Spain, limiting Rodrygo's opportunities.

With his age, potential, and status in the game taken into account, FootballTransfers valued the Brazilian at €35 million.