Paris Saint-Germain Football Club, commonly referred to as Paris Saint-Germain, Paris SG, or simply Paris or PSG, is a professional football club based in Paris, France. They compete in Ligue 1, the top division of French football.

As we all know most football clubs have presidents. Meet the president of Paris Saint-German Nasser Al-Khelaifi 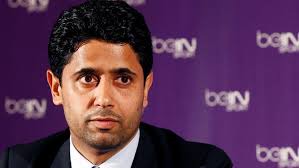 Who is Nasser Al-Khelaifi?

He is a Qatari businessman who is the president of PSG, chairman of Qatar Sports Investments and chairman of beIN Media Group, who have hundreds of millions of dollars invested in the Champions League. He wan born on November 12, 1973 which makes him 47 years and he is 1.8m tall.

He has been president and chief executive officer of PSG since 2011 and has been in charge throughout the club's rise towards the top of European football.

He was named "the most powerful man in French football " and in the year 2020, he was recognized as "the most influential person in football " by France football.

His achievements were still ongoing. In 2019, he was elected by the European Club association as delegate at the UEFA executive committee. He became the first Asian to hold a UEFA position