Many Ghanaians were surprised to see Thomas Partey starting from the bench in Arsenal’s game vs Liverpool at Anfield. 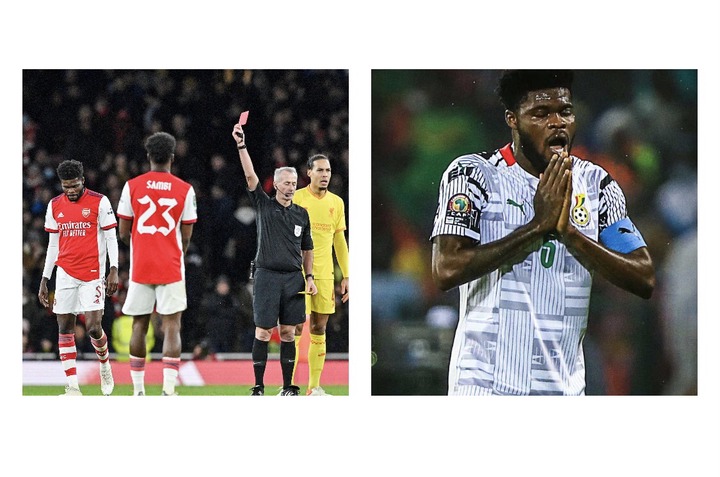 Ghana Black Stars were eliminated from the ongoing Africa Cup of Nations few days ago following their worst performance in the country’s history.

The coach and the players were solely blamed for this abysmal performance, Partey was questioned about his loyalty and commitment taking into consideration  he was the one many looked up to as a deputy captain.

Partey playing in the League Cup raised many questions about his commitment to the Black Stars.

Many coaches raised concerns about the timing of the Africa Cup of Nations as they will loose their players during crucial stage of the season.

Most players are committed and loyal to their clubs because they are the ones paying their weekly wages.

Partey has been injury prone since joining Arsenal and competing in a physical tournament like the Africa Cup of Nations will probably make him show less commitment.

Getting injured during the tournament will make him loose the backing of Arsenal fans. A price  he will not be willing to pay at his expense.

I personally will not blame the players but the organizers of AFCON tournament.Most of the players in the tournament are not playing to their strengths.

Some Ghanaians think Partey’s red card  is a payback but they should rather channel their anger towards CAF.

Liverpool beat Arsenal 2-0 to reach their record-extending 13th League Cup final, while also becoming the first team in the competition's history to defeat the 'Gunners' away from home.

Arsenal had only won one of their previous 18 meetings with the 'Reds' in all competitions, and they will be frustrated not to have generated more chances in the game, which concluded in a rather pleasant night for the visitors.

Mikel Arteta's side started brightly and appeared the more likely to score first, with Gabrielle Martinelli posing a threat down the left, before Alexandre Lacazette's free-kick was saved by Caoimhn Kelleher.

The yellow-clad side, though, would strike first, despite Jol Matip's side-footed effort being called out for offside.

Diogo Jota, on the other hand, was unstoppable moments later, as he scored his fourth goal in as many games against the London side, after some deft footwork allowed him to float past Takehiro Tomiyasu.

Arsenal had not scored in their previous four meetings with Liverpool, and the remainder of the first half offered little promise of improving that unfavorable record, though Fabinho's last-ditch challenge, following more Martinelli magic, prevented a certain goal before halftime.

The second half began with a flurry of action, with Lacazette squandering a fantastic opportunity to draw his team level, before Kaide Gordon blazed an even more gilt-edged chance over the bar at the opposite end.

With the game becoming increasingly stretched, Liverpool struck the woodwork with Ibrahima Konaté's header, and the away side squandered further chances to put the game out of reach.

After a brilliant crossfield pass from Trent Alexander-Arnold found Jota, the attacker made no mistake with his dinked finish to push Liverpool to the verge of cup triumph.

To add insult to injury, Arsenal's Thomas Partey was sent off with minutes remaining as the players yelled their emotions.

Meanwhile, Liverpool has advanced to their second League Cup final under Jürgen Klopp, though they will be hoping for better fortune this time after losing to Manchester City on penalties in 2016.

Thomas Partey garnered a WhoScored rating of 4.66 vs Liverpool last night, the lowest of any Premier League player in the Carabao Cup this season.