By Klutse (self media writer) | 1 year ago

Luis Suarez is a Uruguayan professional footballer who represents the Uruguay national football team as a striker. He made his debut for his country in a 3–1 friendly victory 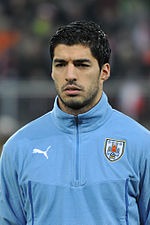 over Colombia in Cúcuta in January 2007.[1] His first goal came in his third appearance for Uruguay, scoring the opening goal in a 5–0 victory in a 2010 FIFA World Cup qualification match against the same opposition in October 2007. Suárez became his country's top scorer at the age of 26 when he scored twice against Tahiti in a 2013 FIFA Confederations Cup group match in June 2013.[2] Suárez scored eleven goals during Uruguay's qualification campaign for the 2014 FIFA World Cup, making him joint top scorer with Robin van Persie during qualification.[3] Following an incident in which he was adjudged to have bitten Italy's Giorgio Chiellini during the finals, Suárez was banned for nine international games and did not feature for Uruguay in 2015.[4] His goal in the 1–0 victory over Saudi Arabia in the group stages of the 2018 FIFA World Cup made Suárez the only Uruguayan to score in three World Cup final tournaments (a feat matched later on by teammate Edinson Cavani).[5]

As of November 2019, Suárez has scored three or more goals (a hat-trick) on two occasions. He scored three times against Indonesia in a 7–1 friendly win in October 2010, and all four goals in a 4–0 victory in a 2014 World Cup qualification game against Chile in November 2011. He has scored more goals in friendlies than in any other format, with 22, followed by World Cup qualifiers, with 21. Suárez has scored seven times in World Cup finals, six times in the Copa América and three times in the FIFA Confederations Cup. He has scored more times (five) against Peru, Bolivia and Chile than any other opponent. Twenty of his goals have been scored at the Estadio Centenario, the remainder coming at overseas venues. Suárez's most recent goal came on 18 November 2019 when he scored in a 2–2 draw against Argentina. He has scored 59 international goals in 113 appearances.[1]

Content created and supplied by: Klutse (via Opera News )