By HonEhEs (self media writer) | 6 days ago

These are players who were on top of their game in this week's UEFA Champions League according to their statistics after the game witnessed by sofa score.

Courtois made an incredible 5 saves against Sheriff Tiraspol more than any saves made by any goalkeeper in this week's Champions League which earned him a place in the team of the week.

The Argentine did a remarkable job for his team with an assist and coming from behind to win.

Silva and his teammates showed a revenge display on Tuesday night against Juventus at home and won by 4-0. He was solid with a clearance offline and helped his team keep a clean sheet that day.

Inacio did an amazing job against Dortmund with 5 clearances, 4 interceptions, 85.3% accurate passes, and one clearance offline which was enough for a 3-1 win.

Two goals coming from Goncalves helped his team demolish Dortmund which now allows them to qualify for the next round if they win or draw in their next game which is against Ajax.

A very tight game on paper but Leipzig made it look easy on the field with a 5-0 win and Nkunku was the star player in this match after bagging 2 goals and an assist.

Emil Forsberg along with teammate Nkunku was on fire as he contributed 2 goals to their team's success and hope to qualify for Europa League.

Madrid won 3-0 on an away trip and Toni Kross did contribute one in the 41st minute after an assist from Rodrygo which was enough to book their spot in the next round of the competition.

Reece James scored a marvelous goal in their 4-0 win against Juventus on Tuesday night. His statistics after the was 3 shots on target, 84.4% accurate passes, 3 key passes, and was fouled 4 times.

A splendid performance from the youngster.

Haller came on the second half and turned tables around with two marvelous goals after they were losing by a goal to nil against Besiktas.

Haller is now equal at the top of the goal charts with Robert Lewandowski in this season's Champions League.

Inter Milan were having trouble in the first half but things changed in the second with 2 goals coming from Dzeko secured a win and through to the next stage of the competition. 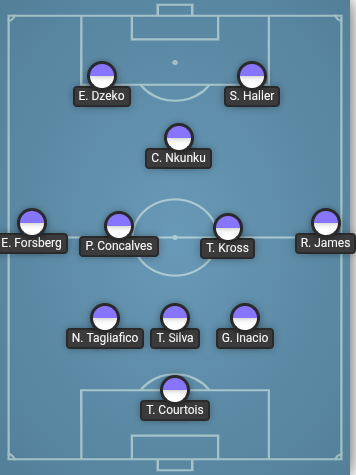