By KwadwoSarfoGh (self media writer) | 4 months ago 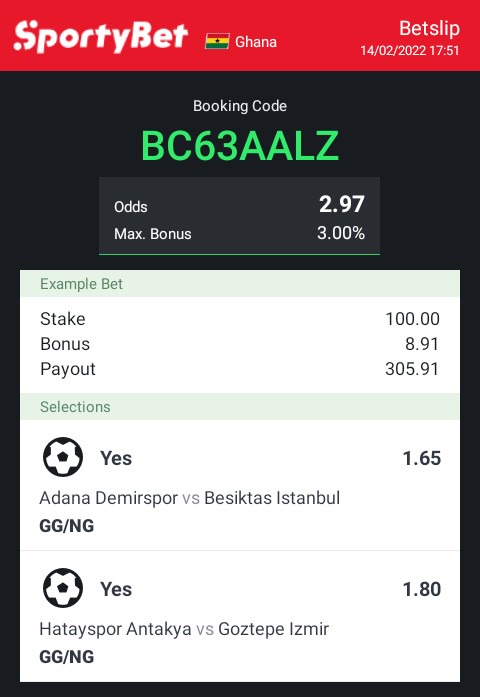 Good morning everyone today we are going to make money on sports betting so let us stake high and win big together.

1.RB Leipzig over 1.5 goals or 2.5,Leipzig will win but you have choose one be wise and win big.

3.Al-Sadd over 2.5 or Al-Sadd will win stake high and win big

4.Kazma over 2.5 or Kazma will win stake high and win big

6.Reggiana will win or draw stake high and win big

10.Leicester over 1.5 stake high and win

11.Barcelona vs Napoli first half under 1.5

All eyes will be on Camp Nou when Barcelona and Napoli go head to head in the Europa League last 32, first leg. Barca head into the match following a 2-2 draw with Espanyol in the Catalan derby where Luuk de Jong scored a late equalizer. January signing Pierre-Emerick Aubameyang should be recalled to the starting XI, while Dani Alves is back from a domestic ban. Napoli target Memphis Depay is a major doubt, and he will be assessed ahead of the kick-off.

Yet another new signing Ferran Torres should continue to lead the line for the Catalan outfit. The Neapolitans, on the other hand, played out a 1-1 draw with Inter in the Serie A derby. Napoli’s main goal is to win Scudetto, and seeing that Barca reinforce the squad in the January transfer window, home win should be considered. Both Lozano and Tuanzebe are injured for the visiting team. Both Lozano and Tuanzebe are sidelined for the Partenopei

After sharing the spoils with Juventus in the Serie A derby, Atalanta will look to return to winning ways when they take on Olympiakos at their Gewiss Stadium in the Europa League last 32, first leg. The Orobici are on a five-game winless run in all competitions, but they are still seen as favourites to beat Olympiakos in front of home fans. Ukraine international Malinovsky is pushing for a start after scoring a screamer against Juve, while Musso is back from suspension.

Duvan Zapata is likely to miss the game with injury. The Thrylos, on the other hand, aim to build on a hard-fought 1-0 win over AEK. Olympiakos, on though, are not regarded as good travelers, which is probably the main reason why home win should be considered. Morocco international Youssef El Arabi is back from international duty for the away side.

Porto and Lazio take on each other at Estadio do Dragao in what is expected to be an interesting Europa League clash. The Dragons are on the right track to regain the Primeira Liga title, but they have big ambitions for the Europa League knockout stages as well. Wilson Manafa is sidelined with injury, but he should be the only absentee in the home team.

The Biancocelesti, on the other hand, aim to build on a 3-0 win over Bologna. The Serie A side are likely to stick to their attacking style of play, and given Porto’s attacking potential, we believe that there is a big value in betting on both teams to score. In their last meeting at the venue, back in 2003, Porto outclassed Lazio 4-1. Defender Francesco Acerbi is out of contention with injury for the visiting side.

All eyes will be on Red Bull Arena when Leipzig and Real Sociedad face each other in the Europa League derby. The Red Bulls quickly bounced back from a 3-2 loss to Bayern Munchen, with the team beating Koln in front of home fans. Leipzig aim to give fans yet another reason for celebration, but this match will be anything but a walk in the park for the home side. Both Halstenberg and Raebiger are sidelined with injuries, but there are no other absentees in the home team.

La Real, on the other hand, aim to build on a 2-0 win over Granada. The Basque outfit managed to keep a clean sheet in each of their last four league fixtures, and they are likely to rely on their rock-solid defence. A low-scoring affair is on the cards, and we believe that there is a big value in betting on under 2.5 goals. Zubeldia is back from suspension, while all Monreal, Fernandez, and Barrenetxea are sidelined with injuries.

Thanks for the response try and share,like and comment