Cristiano Ronaldo was seen visibly upset after being replaced in the 71st by Harry Maguire. 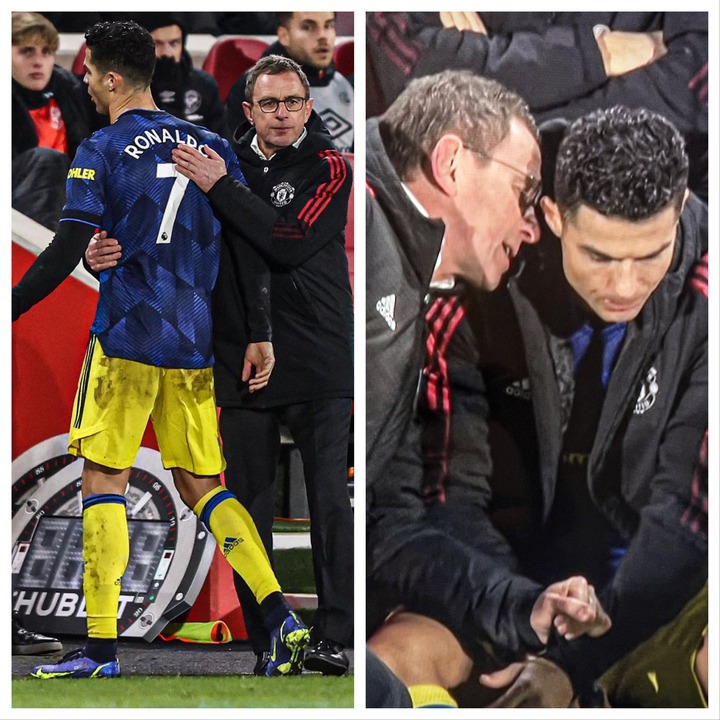 Ronaldo and Greenwood were replaced by Harry Maguire and Marcus Rashford, and the Portugal star was plainly displeased with the change.

He rebuked Rangnick as he walked off the field and was subsequently observed grumbling angrily on the bench.

Rangnick went down next to Ronaldo to soothe him and ostensibly explain why he had taken him off the pitch.

Rangnick felt vindicated when Rashford scored United's third goal before Brentford's Ivan Toney pulled one back late in the game.

Ronaldo recently expressed his emotions about United's troubles, with the club currently unable to find any sort of consistency under Ralf Rangnick.

Despite being 11 points behind Liverpool, who are now in third place, the five-time Ballon d'Or winner stated that the team should not settle for anything less than a top-three finish.

The coach later explained that he subbed Ronaldo off because he is 36 years of age and just came back from a hip injury and he wasn’t ready to risk him.

He explained further that he is counting on Ronaldo to help the team until the end of the season.

It is obvious that Ronaldo was unhappy because of his urge to win and not settling for less. He wanted to be on the field until the very last minute pushing his team to victory. He wants to impact a positive mentality into the team which they very much lack at the moment.

His antics was not to disrespect the coach but rather push his team to win.

The triumph marked a watershed event for the 'Red Devils,' as they became the first Premier League team to win 300 games away from home.

Cristiano Ronaldo replaced Edinson Cavani in the starting lineup and was nearly found by Bruno Fernandes early on, but home captain Pontus Jansson made a quick interception.

The men of Thomas Frank, on the other hand, enjoyed a period of dominance and created multiple opportunities.

United's forwards were unable to get into the game, and a poor corner allowed Brentford to break.

Jensen was repelled for the second time by De Gea, and Ivan Toney's follow-up was nearly knocked into his own net by Raphael Varane.

The hosts will be kicking themselves for not being in front, and United came alive once the players resumed, with Ronaldo heading onto the crossbar after Fernandes' cross.

On 55 minutes, Fred's astute pass found Elanga in the box, and the 19-year-old held off Mads Roerslev, flipped the ball into the air, and glanced over Jonas Lössl into the corner.

Brentford didn't have much time to recover before United increased their lead thanks to Greenwood, who broke a league scoring drought that had lasted since October 16th.

Ronaldo superbly chested Scott McTominay's clipped cross into Fernandes' path, and the Portuguese midfielder sprinted forward before squaring for Greenwood, who tapped into an empty net.

All Ronaldo wants is to win and he thinks he can make that possible being on the field rather off it.

His desire and ambition to be the best is what makes it difficult for him to help the team any way he can making impact in every single game and certainly on the field.

Watch the video of his reaction below