The Cameroonian football icon was videotaped in a violent confrontation with a fan in Qatar who appeared to be harassing Eto'o when he was exiting a match between Brazil and South Korea. 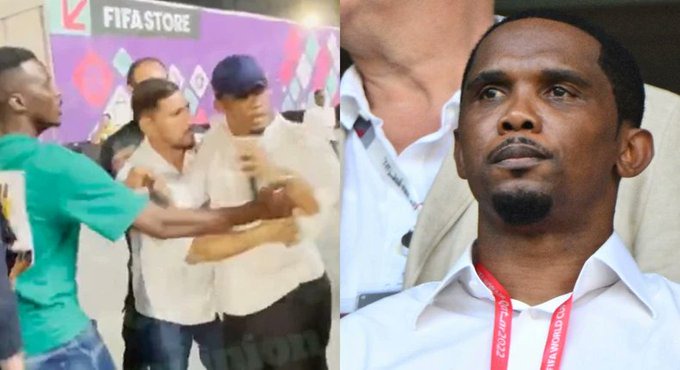 The Selecao scored four first-half goals at Stadium 974, with Vinicius Junior, Neymar, Richarlison, and Lucas Paqueta all on target, and the President of the Cameroon Football Federation was in attendance.

Footage of the event, which occurred following Brazil's last-16 victory against South Korea, was widely circulated on social media.

It's unclear what provoked the incident, which came just seconds after Eto'o appeared content to pose for selfies with supporters at the forecourt of Stadium 974.

Former Chelsea and Barcelona striker Eto'o appears to attack an Algerian YouTuber with his knee before being restrained again as the man, who appeared to have his camera confiscated by another man, rose to his feet.

Samuel Eto'o has spoken out for the first time since a video emerged of him seeming to knee a supporter in the head after Brazil's match against South Korea. 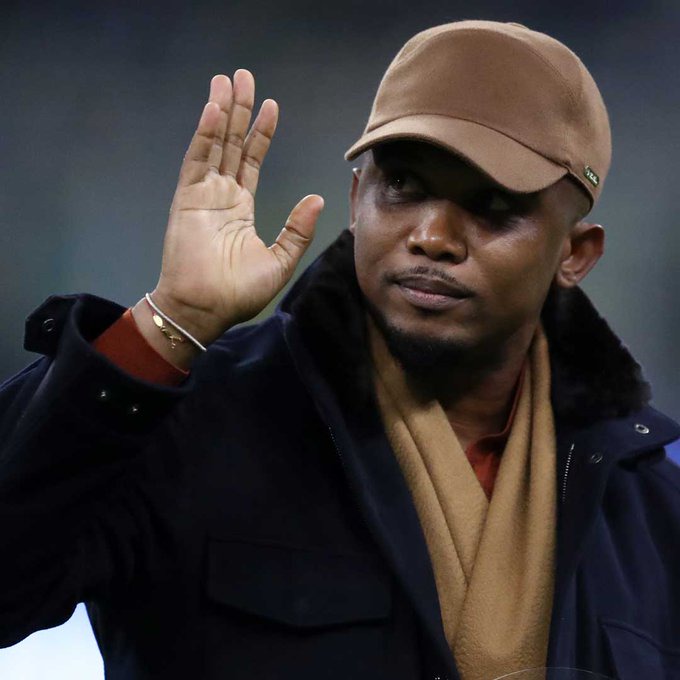 The Cameroonian football legend issued the following message on social media: "On December 5, after the Brazil-South Korea match, I had a violent altercation with a person who was probably an Algerian supporter. I would like to apologize for losing my temper and reacting in a way that does not match my personality. I apologize to the public for this unfortunate incident. I pledge to continue to resist the relentless provocation and daily harassment of some Algerian supporters. Indeed, since the Cameroon-Algerian match on March 29 in Blida, I have been the target of insults and allegations of cheating without any evidence."

Samuel Eto'o emphasized the harassment by Algerian fans in Qatar since the Algerians qualified for the World Cup at their expense.

Samuel Eto'o emphasised the harassment by Algerian fans in Qatar since the Algerians qualified for the World Cup at their expense.

“During this World Cup. Cameroonian fans have been harassed and pestered by Algerians on the same subject. I would like to mention that Algeria's defeat was cruel but perfectly in line with the rules and ethics of our sport. All the appeals made by the Algerian Football Federation to the competent jurisdictions have been rejected. I, therefore, call on the Algerian authorities and Federation to take their responsibilities to put an end to this unhealthy climate before a more serious tragedy occurs.” 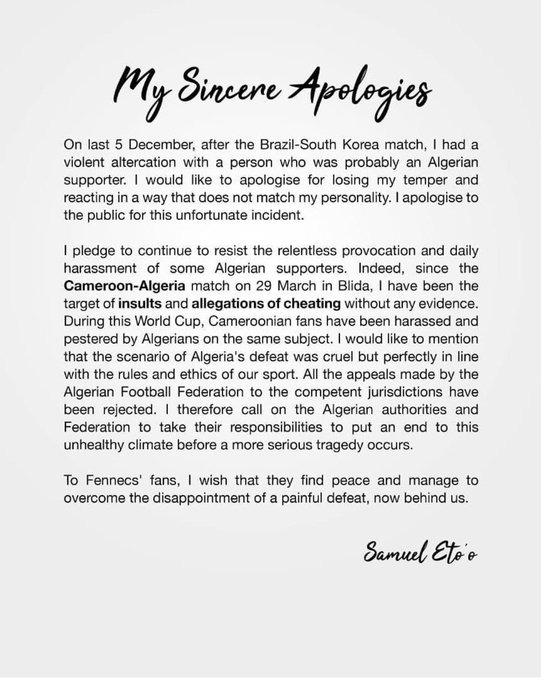