By FreshGist.gh (self media writer) | 21 days ago

Arriving at a big club and with no experience at Ghana’s premier division, as is dealing with pressure of playing for Hearts, yet the highest compliment one can give to Salim Adams is to admit that he instantly looked like he belonged to the team.

But who is Salim Adams and what is there to know about him?

Adams is prepared to turn, shimmy and turn again under mountains of pressure to evade his marker, and will always look to pass the ball vertically. His progressive style of play makes him one of the first points of reference for the goalkeeper, who waits for him to drop in and collect possession before getting the team going.

He is quick to shield his backline and is not afraid of the physical battle, enjoying plenty of duels in his few outings for the Phobians. He has also stated that he can play as a trequartista, and his goals for New Edubease FC back up these claims. Basically, he can do it all, and with unerring confidence.

If most Hearts fans are being honest, unless they take a keen interest in Ghana’s Division One League, not many had heard of Salim Adams before his arrival at the club.

Against C.I. Kamsar on Sunday, everyone finally got to see what all of the fuss was about as the former New Edubease FC midfielder scored a goal for Hearts in his side’s 2-0 win over the Guineans. That goal was Adams' first for his new employers in his first competitive game.

It is for this unteachable ease and calm on the ball that he has earned the nickname Pogba, after the France and Manchester United midfielder.

"If you're not having fun on a pitch then there's no point. I'm always going into a game thinking I'm going to do well." He told phobianews.com

Adams admitted to phobianews.com that he hopes to get the chance to play in England at some point in his career, and spoke of his dream of playing for Manchester United and he follows all their games. 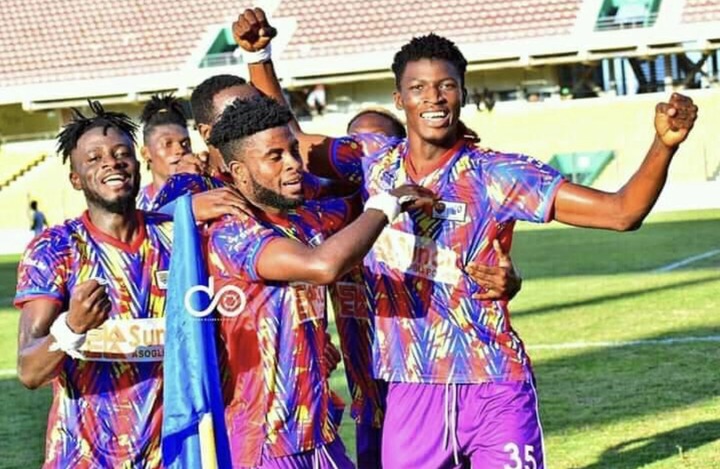 "I would like to be in midfield there," he admitted. "I can already see myself playing at Old Trafford in the not-too-distant- future, with Pogba, Rashford, Sancho and Greenwood."