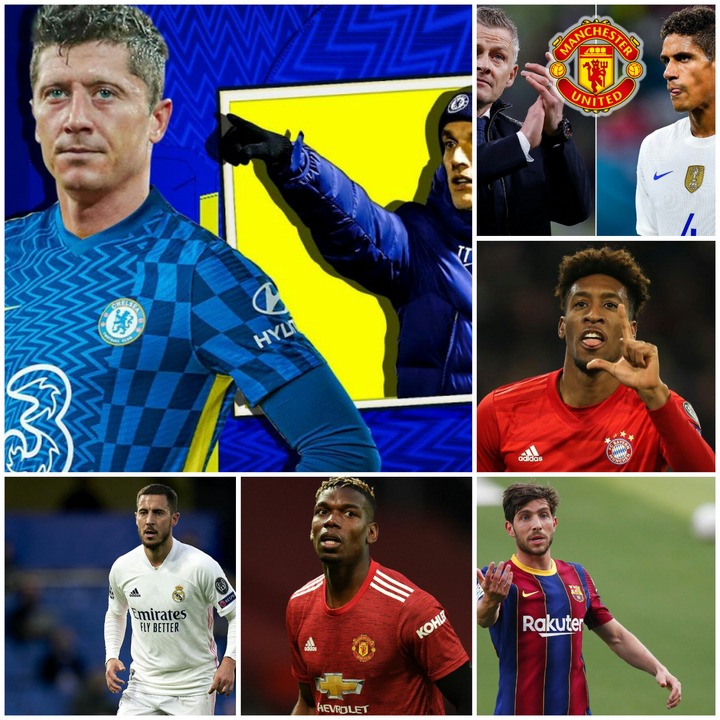 Former blues talisman, Eden Michael Hazard is reportedly eyeing Stamford Bridge return following his underwhelming spell with the galacticos. The 30 year old was a sensation during his time in the premier league, however he has found life at he Spanish capital cumbersome, fuelling speculations about his exit. Reports from English news outlets claims, the Belgian winger want to return to Stamford Bridge if his services are no longer needed at Madrid.

Manchester United, Liverpool and Chelsea target, Kingsley Coman is yet to sort future at Bayern Munich with contract negotiations still in a limbo. The French winger and his entourage are still holding out to their €12m a year after tax salary, which the Bavarians are unwilling to agree. Coman feels he merits the pay rise in light of his huge contributions over the years and have told the club he won't sign the contract until the club aggrees to meet his demand. The 26 year old will become a free agent next year if both parties doesn't reach an agreement and would present a big chance to his suitors.

The blues are desperate to fine tune their attack before next season but have been dealt a blow after Dortmund refused to reduce the financial terms of their prime target. Chelsea are contemplating on going in for Bayern Munich and Polish forward, Robert Lewandowski, who appears much proven than the young Norwegian striker. The blues are expected to cough up £50m to wrap up the deal for the 32 year old if an agreement is reached.

Manchester United midfielder, Paul Pogba has been linked with a move out of Old Trafford and french giants, Paris Saint Germain remains the favourites to land the 27 year old. Manchester United have told Pogba they are ready to make him the highest earner at the club if would sign the new contract but there hasn't been any progress in the contract talks. With the negotiations still in a limbo, Paris Saint-Germain is plotting to lure him to France this summer.

Highly rated German midfielder, Leon Goretzka happens to be another Bayern star the club stands and risk of losing for free if an agreement is not reached before next summer. The 26 year old is also requesting for €20m a year salary but the club are willing to offer him half of the amount, thus €10m which stalled the negotiation. Manchester United are willing to meet his €20m demand and may opt for Old Trafford move if negotiations with Bayern fails.

Raphael Varane has reportedly told Madrid he wants to move

France and Real Madrid center back, Raphael Varane has reportedly told Madrid hierarchy that, he's wants to leave the club. The 27 year old has been heavily been linked with move to the Old Trafford this summer but the Los blancos are keen to keep hold of the defender following the departure of Sergio Ramos. However, Madrid seem to have lost the battle after the defender declared his desire to leave. The deal is expected to push through in the coming weeks.

Barcelona full back, Sergi Roberto is on the wishlist of the Bavarians as they eye a summer move for the spinard. Barcelona's financial handicap has instigated the club to sell star players on huge salaries and the 29 year old is a victim. However Bayern Munich is ready to offer an escape route to the Spanish international by purchasing him this summer