By Powerbetsghana (self media writer) | 1 year ago

Paul Pogba is part of the French side that has been doing great in the UEFA Nations League having won 4 out of their 5 fixtures, drawing only one match. 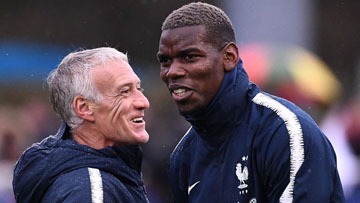 Things have been going great for his national team but have been going awful for his domestic club in England. United have not been playing well enough and Pogba has seen less playing time in recent games.

Earlier this month he even gave away a penalty which led to Manchester United’s loss against rivals Arsenal.

Let us make soccer a joy by betting on United and the EPL with Powerbets: https://j.mp/35GoRSH

The French player who played a crucial role in the recent Nations League victory against Portugal finally commented on the tough times he is having at United compared to the national team.

"I had never known such a difficult period in my career," Pogba told RTL. "The France team is a breath of fresh air, the group is exceptional, it's magic."

Does this mean Pogba only plays well when he is playing with high profile and performing players compared to standard players like in his team? Many questions like this one have been raised while Pogba continues to come in from the bench now and then.

The French midfielder has only played 2 full games for United in 11 games in all competitions and has come from the bench 6 times.

After the international break United will take on West Brom before they play Southampton to try and better their position.

Award-Winning Player Says That He Is Not Eager To Play For The Black Stars.

"A club in Accra has made an official offer." Emmanuel Agyemang Badu made a revelation.

I'm 120% Certain Of Playing In The GPL, No Offer From Kotoko But A Club In Accra Wants Me- A. Badu