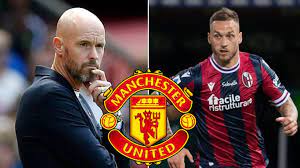 Manchester United have given up on their pursuit for former West Ham player Marko Arnautovic. According to transfer guru, Fabrizio Romano, The Old Trafford club gave up their interest in signing the player after the outpour from the fans when their interest was made public.

Arnatauvic has been described as a low cost Striker and was Erik Ten Hag’s choice as a backup striker for the club this season. With the reports coming in, United will now turn their attention to PSV’s attacker Cody Gakpo.

Manchester United have concrete interest in signing the 23 year old after their long term target Benjamin Sesko signed for RB Leipzig. The Old Trafford club will be willing to pay a fee of around 35 million pounds for the PSV man.

Gakpo is highly rated by clubs around Europe and is seen as the next big talent and with United’s interest, the club will be certain to get an attacker who can be consistent throughout the season.

Check out Pictures of The Daughters of Frank Artus, Diana Hamilton and Maame Dokono