Check Out Some Exciting Fixtures For GPL Matchday 28 Out Of 34, Position-Changer Games

In recent times, the 2020/2021 season of the Ghana Premier League (GPL) has become very exciting and interesting to follow. The positions of most of the GPL clubs have been changing game after game due to how close the points of the various teams are. This competition for the ultimate is what is usually expected by fans of the game and not a one-way domination by a single club. The appointment of new coaches by some of the teams seems to be working in the team's favour. The Accra-based club has shown massive improvement upon arrival of Coach where the team has managed to win its previous five premier league games. Asante Kotoko on the other hand has only won two out of its give last premier league games. Asante Kotoko S.C. and Accra Hearts of Oak S. C. have been battling it out at the top over the first position.

Below is the standings of the teams after Gameweek 27: 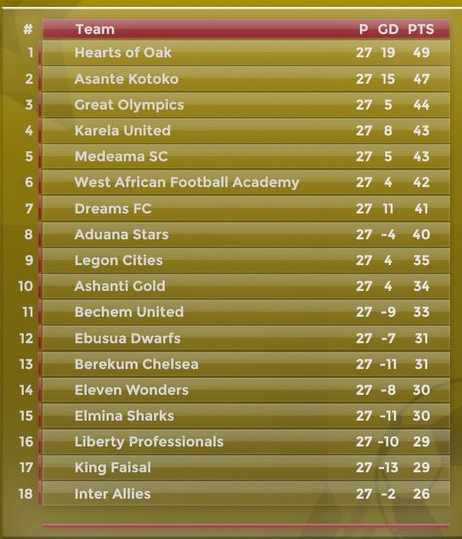 The action continues this week as there are other exciting fixtures to look out for in Matchday 28. Teams would be looking forward to winning their respective games so that they can move up the ladder. The teams in the relegation zones are all battle-ready to avoid being relegated from the league to Division One.

Matchday 28 of the GPL would come off this Friday, June 5, 2021. In-form Accra Hearts of Oak would be facing third placed Great Olympics who also seeks to go without a loss in it 3 GPL games. This could be described as the "Accra Derby" since both teams are located in the Greater Accra Region.

Asante Kotoko S.C. who are seeking to overtake league leaders would be playing against Ashnati Gold who have not been that good a side in its 5 previous GPL games, losing 3 of such games. This could also be described as the "Ashanti derby" since both teams are located in the Ashanti Region.

The outcome for games for Matchday 28 would cause massive changes in the league table as points of the teams are closer to one another. A win, lose or draw would affect teams.

Below are the matches for Matchday 28 with some exciting fixtures

Hearts of Oak vs. Great Olympics

Kindly leave your comments below. Thanks for reading the article.