By KkCabobo (self media writer) | 8 months ago

13 Amazing Religious Buildings Across The World 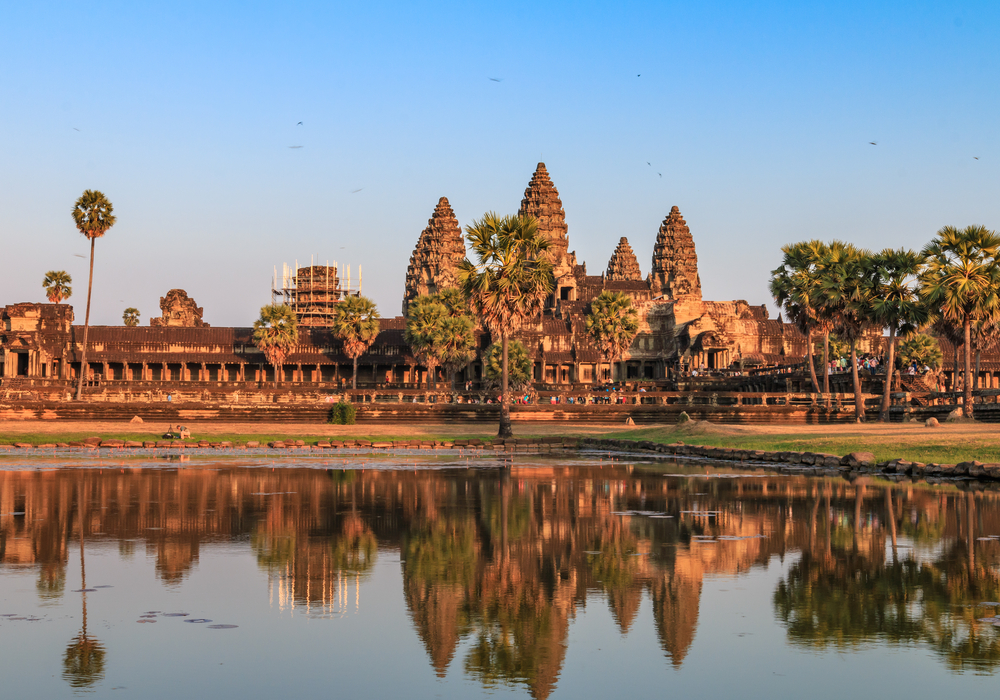 These 13 buildings span continents, timelines, and religions, and could not look more different from one another. However, all all are united by their unique settings and the wonder of their architecture. From a Thai Buddhist temple with Hello Kitty engravings to a Finnish church carved out of granite, here are thirteen of the most amazing religious buildings around the world. 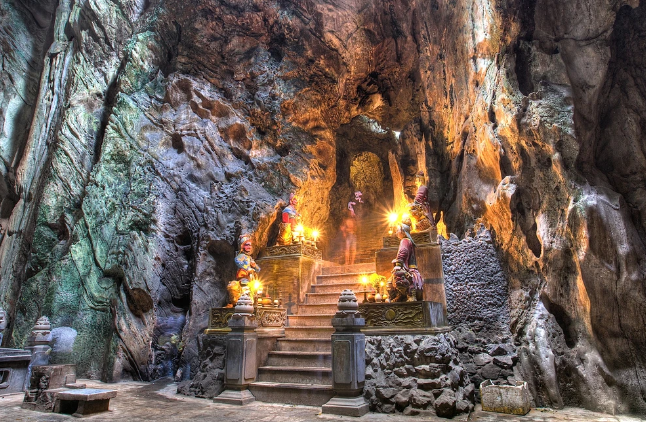 Ngu Hanh Son, or the Marble Mountains, are a group of five towering mountains, located south of Danang City, Vietnam, and named after metal, wood, water, fire, and earth. In the 19th century, Hindu and Buddhist grottos were built in the caves and tunnels running through the mountains. One with a particularly religious feeling is the Huyen Khong Grotto, where there is no light except for that cast through the holes in the ceiling of the cave. These classically religious qualities are made further atmospheric by the seclusion of being in hidden caves, accessed by stone steps leading up into the mountains. 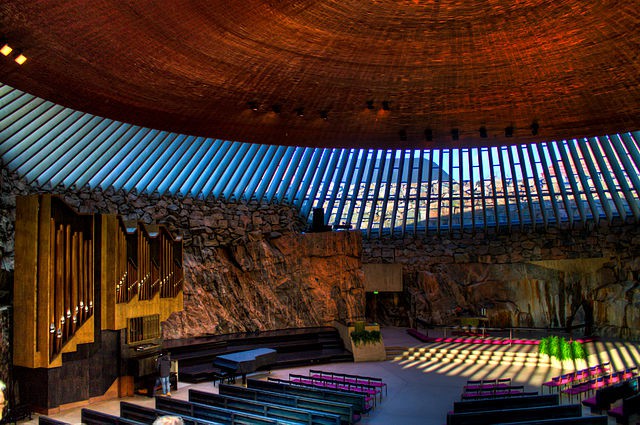 Carving a place of quietude and magnificence out of a cityscape, theRock Church in Helsinki was built by two brothers in 1969. It was built out of a pre-existing granite structure, making it ambiguous in its appearance from the outside. This Lutheran church is spectacular in its incorporation of natural elements, the rays of light that flood through the skylights, the ice-age crevice as an altar piece, overarching copper dome, and the solid rock walls. There is little surprise that it is one of Helsinki’s most visited buildings. 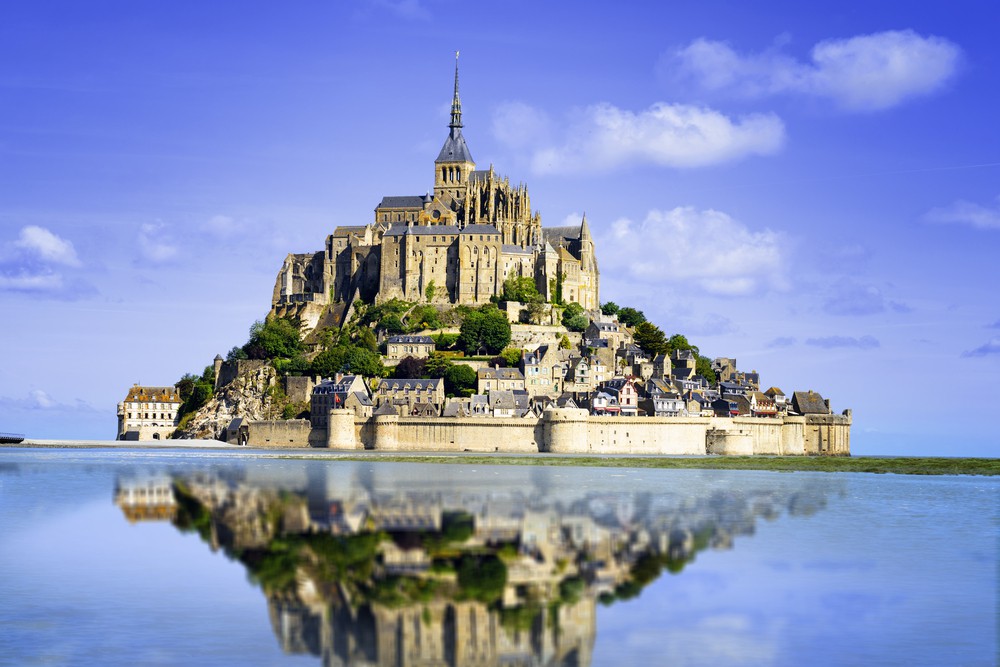 Just 600 meters from the Normandy coastline, this Benedictine abbeystands with a magnetic and mysterious beauty at the highest point of the small rock formation. Built in Gothic style and completed in 1523, it is accessible only at low tide, by crossing the shores and then winding up the steep streets to the abbey at the pinnacle of the island. It was originally a site for a huge number of pilgrims, attracting many craftspeople during the Middle Ages, and it continues to draw great numbers to this day. The island has been under various controls, from the Vikings to Benedictine monks, and this complex past is palpable. 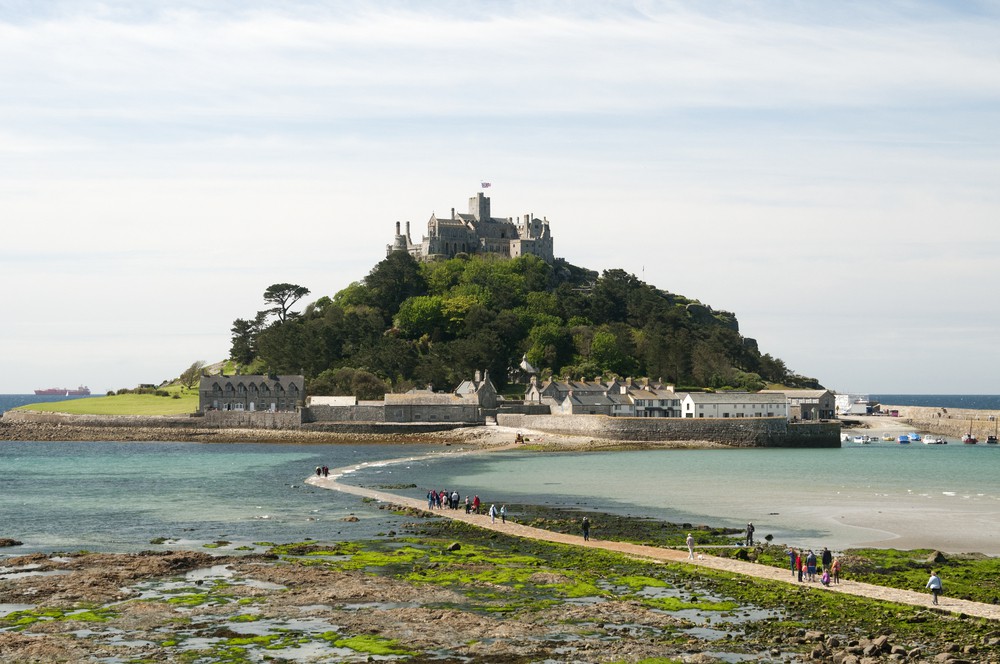 With a church and castle at the peak of the rocky island, St. Michael’s Mount inEngland shares many similarities with its French counterpart, Mont Saint-Michel. A gift to the Benedictines, St. Michael’s Mount was occupied by the same religious order as the French island. A similarly atmospheric site, accessible only across the man-made granite causeway when the tide is out or low, St. Michael’s Mount is a place of isolation and curiosity. The stories surrounding its history only serve to further this feeling, with tales of giants being slayed and visions of St. Michael the Archangel. 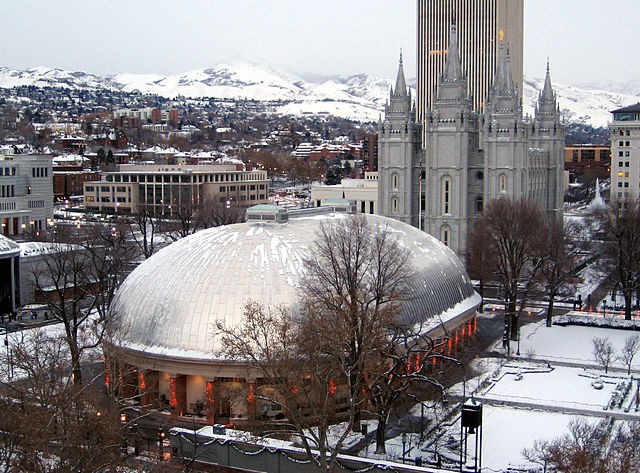 Supposedly described by Oscar Wilde as the most purely dreadful building he ever saw, this Mormon church and feat of engineering was designed by Henry Grow, utilizing his experience in bridge construction. Built between 1864 and 1867, the church can hold 7,000 people and has one the largest pipe organs in the world. While disliked by Wilde, and described by some as the ‘Church of the Holy Turtle,’ it was described by Frank Lloyd Wright as ‘one of the architectural masterpieces of the country and perhaps the world.’ Rightly so, the atmosphere created by the magnitude alone is overwhelmingly powerful. 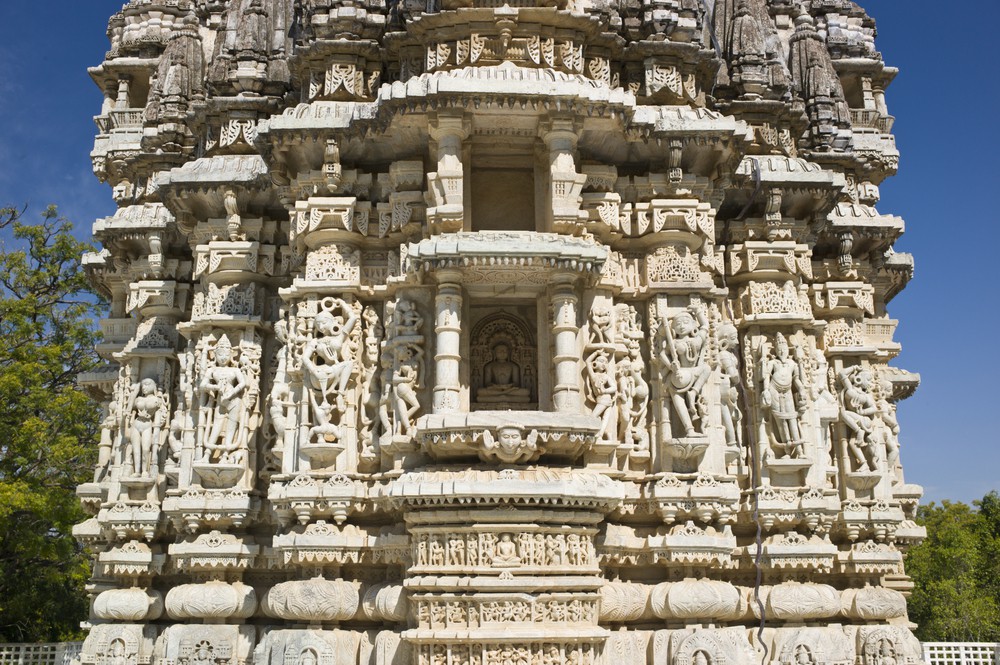 Built between the 11th and 13th centuries, these five temples of Dilwaraare a famous place of pilgrimage in Rajasthan for followers of Jainism. The simple architecture of the buildings themselves reflects the honest and anti-materialistic values of the religion. Vimal Vasahi, built in 1031, is the most famous and arguably most impressive of the temples, carved entirely out of white marble. With intricately detailed floors, doorways, ceilings and pillars, and mesmerizing in its attention to detail, it is believed to have taken 1,500 masons and 1,200 laborers 14 years to build. 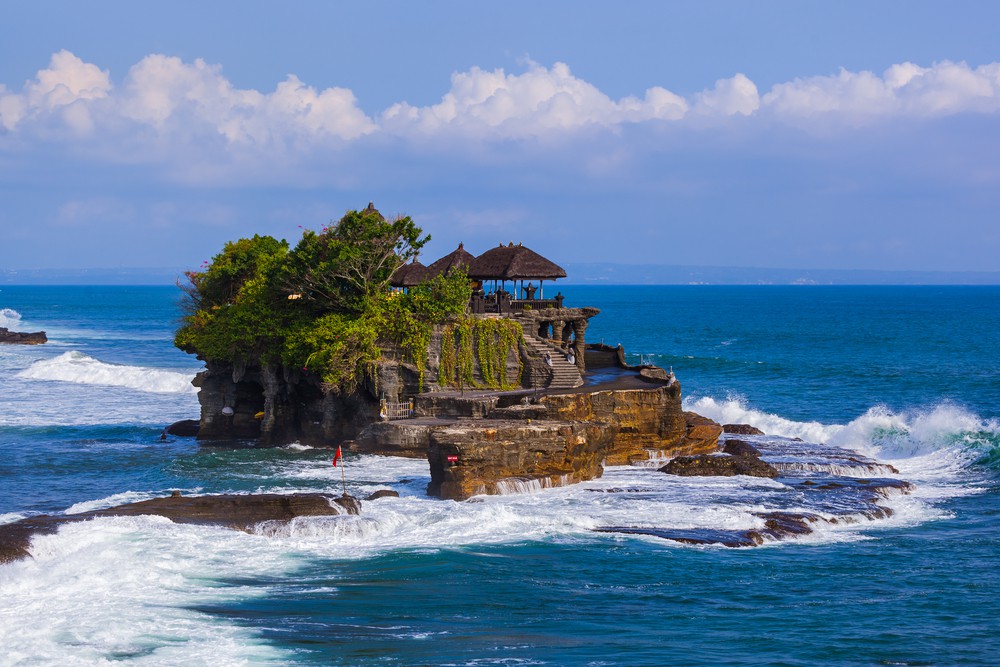 Pura Tanah Lot sits upon a rock offshore of Bali, as part of a chain of seven sea temples established along the southwestern coast. Though only Balinese people can enter the temple, a huge number of tourists visit to see it from just the outside. It serves as an important place of pilgrimage and is deeply woven with the Balinese mythology. A place of worship to Balinese sea gods, it was constructed in the 16th century. It is believed there are venomous sea snakes guarding the temple from intruders. With its seclusion and dedication, this is truly a mystical place. 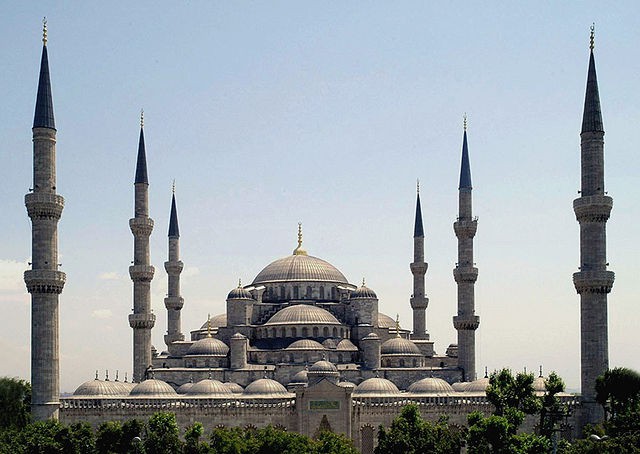 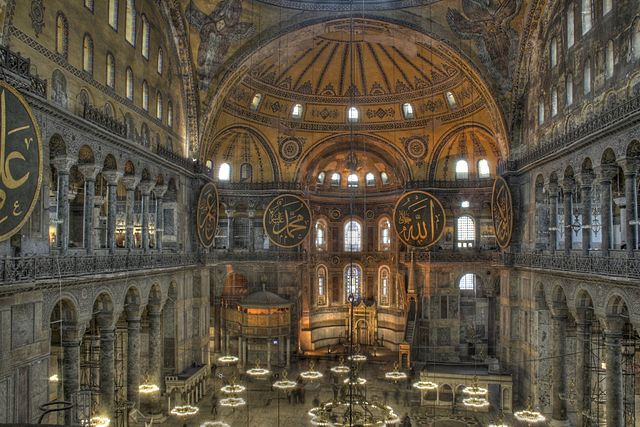 Standing at opposite ends of the same square, these two buildings are hugely representative of Istanbuls heritage. Hagia Sophia is an example of Byzantine architecture and was the largest cathedral in the world for nearly 1,000 years, formerly a Greek Orthodox cathedral, briefly a Roman Catholic cathedral, then a mosque, and now it is a museum. Its structure and design influenced that of the Blue Mosque, completed in 1616. With the exquisite blue running through the interior, in the tiles and the stained glass, the Sultan Ahmed Mosque honors aspects of the design of its neighbor while moving forward in scale. It was built to accommodate a staggering 10,000 people during prayer. 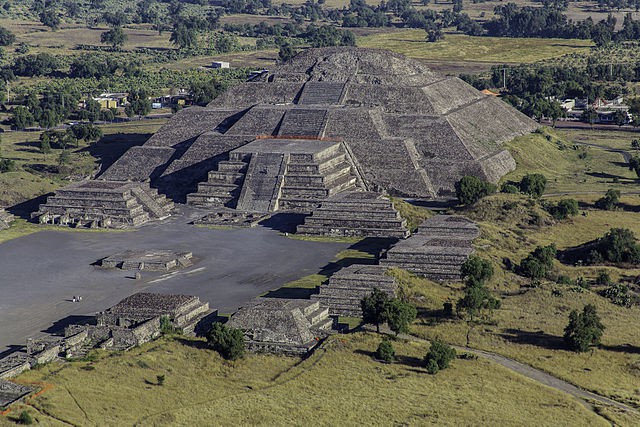 With the ‘Avenue of the Dead’ running through its center, surrounded with many impressive structures, including two great pyramids, one for the Sun, one for the Moon, and famous as being sites of both human and animal sacrifice, Teotihuacan, in Mexico, was one of the largest pre-Columbian cities in the Americas. The founders and builders of this ancient city remain disputed, but it is thought to have been established around 100 BCE and reached its most prolific point around 450 CE. The scale and history of this site make it truly extraordinary. 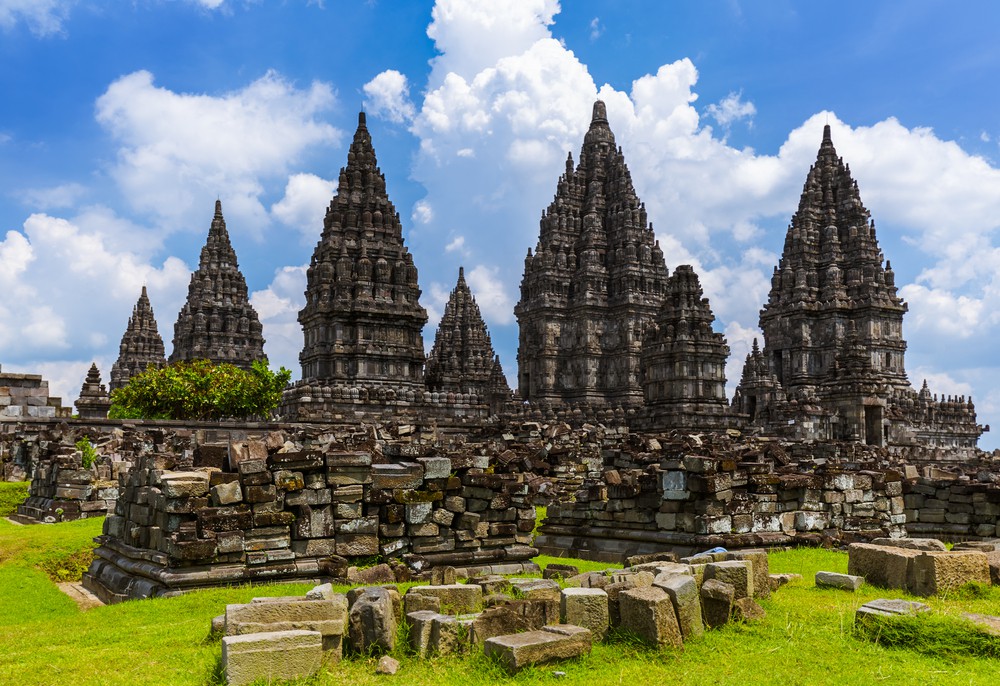 As the largest Hindu temple site in Indonesia, with originally over 240 temples as part of the structure, Prambanan is a display of archetypal Hindu architecture. Built in around 850 CE, with impressive and detailed features, the exquisite intricacy of the reliefs, and the beauty of the architecture make it stand out amongst the rest. With a central temple of 154ft and dedicated to the ‘Trimurti’, the Hindu deities, Shiva, Brahma and Vishnu, the complex of buildings are a religious site of both extensive scale and minute detail. 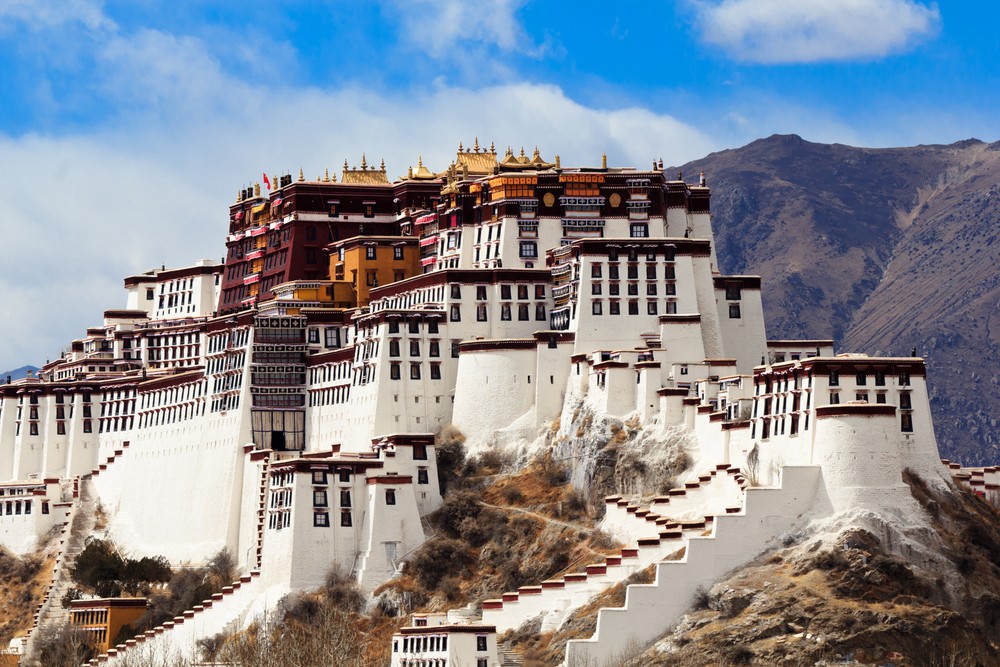 The structure as it stands now was constructed under the rule of the 5th Dalai Lama in 1645, taking more than 50 years to complete. Potala Palaceserved as the seat of Tibetian government as well the winter residence of the Dalai Lamas. ‘The White Palace’ functions as the living quarters of the Dalai Lama, while ‘The Red Palace’ is dedicated to prayer and the religious teaching of Tibetan Buddhism. With a towering 13 stories and over a thousand rooms, it is such an impressive structure that Zhou Enlai even sent his own troops to defend it from the Red Guards during the Chinese Cultural Revolution. 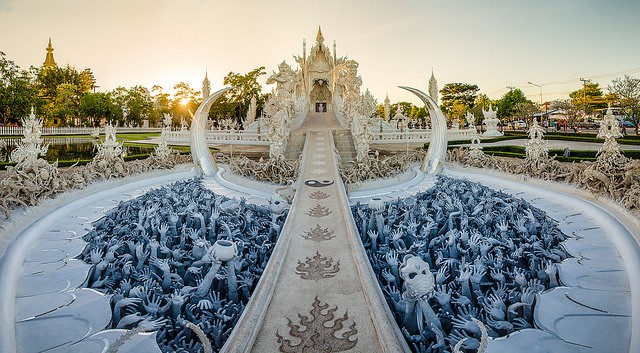 Unusual in its inclusion of characters from The Matrix, Hello Kitty, and Angry Birds, this entirely white Thai temple re-imagines the meeting of art and religious building. ‘The White Temple’ in English, construction began in 1997, and it is still a work in progress. The artist, Chalermchai Kositpipat, has formulated these religious teachings in the context of the modern world. An extremely visual and unusual building, it is groundbreaking in its reinterpretation of Buddhist teaching through modern figures and references. 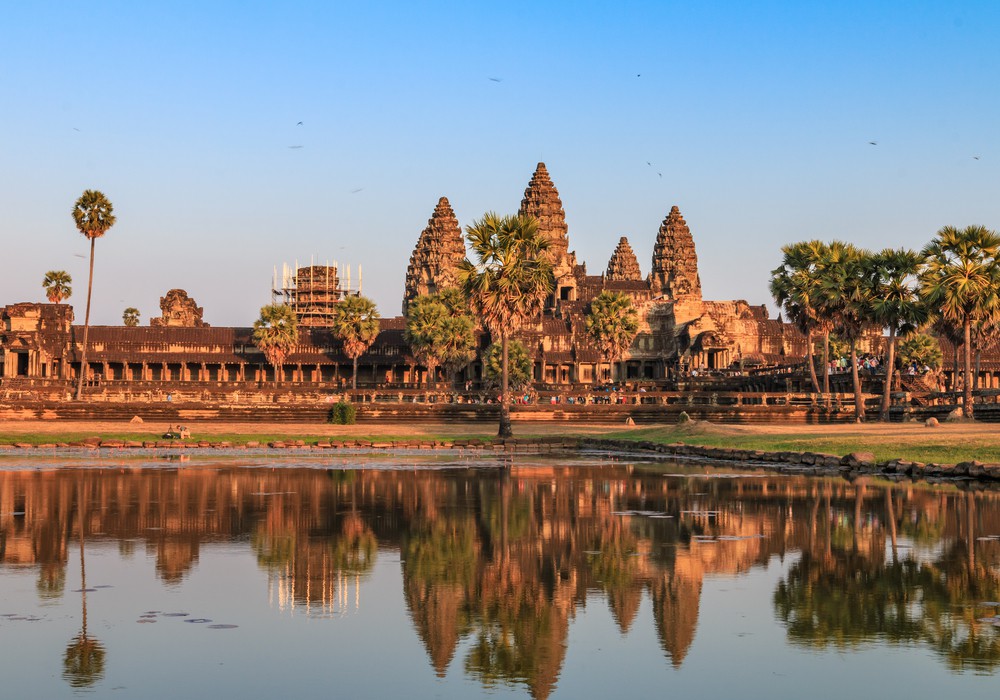 Described by a Portuguese monk in the 16th century as ‘of such extraordinary construction that it is not possible to describe it with a pen, particularly since it is like no other building in the world.’ A network of over 100 stone temples built during the 12th century, Angkor Wat in Cambodia is the largest religious building on earth. Originally dedicated to Vishnu, a Hindu deity, it later became a Buddhist temple. A triumph of the Khmer Empire, representing qualities beyond the religious in its creative and structural ingenuity, it is clear why it is thought to be a miniature replica of the universe.