Check everything to Know about West Africa and its States 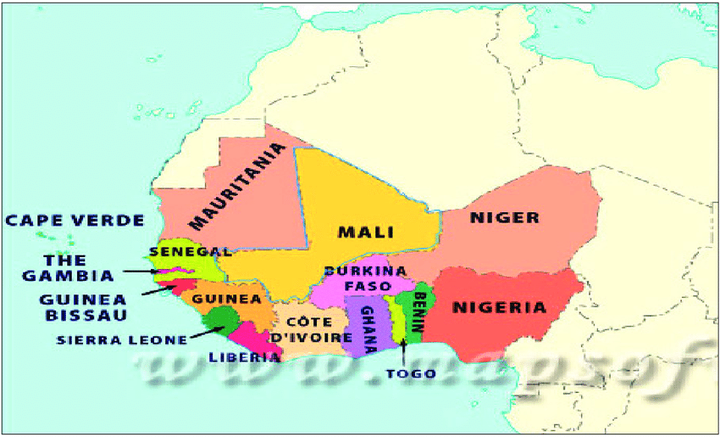 West Africa or Western Africa is the westernmost region of Africa. The United Nations defines Western Africa as the 16 countries of Benin, Burkina Faso, Cape Verde, The Gambia, Ghana, Guinea, Guinea-Bissau, Ivory Coast, Liberia, Mali, Mauritania, Niger, Nigeria, Senegal, Sierra Leone, and Togo as well as Saint Helena, Ascension and Tristan da Cunha.The population of West Africa is estimated at about 381 million people as of 2018, and at 381,981,000 as of 2017, of which 189,672,000 are female and 192,309,000 male.The region is demographically and economically one of the fastest growing on the African continent.

Early history in West Africa included a number of prominent regional powers, that dominated different parts of both the coast and internal trade networks, such as the Mali and Gao Empires. West Africa sat the intersection of trade routes between Arab-dominated North Africa and specialized goods from further south on the continent, including gold, advanced iron-working, and products like ivory. After European exploration encountered a rich local economies and kingdoms, the European slave trade exploited previous slave systems to provide labor for colonies in the Americas. After the end of the slave trade in the early 19th century, Europeans, especially France and Britain, continued to exploit the region through colonial relationships -- exporting a number of extractive goods, including labor intensive agricultural crops like cocoa and coffee, forestry products like tropical timber, and minerals like gold. Since independence, many of the West African countries, like Ivory Coast, Ghana, Nigeria and Senegal, play important roles in the regional and global economies.

West Africa has a rich ecology, with strong biodiversity and several distinct regions. The climate and ecology are heavily influenced by the dry Sahara to the North and East, which provides dry winds during the Harmattan, and the west and humid climate to the south and of the Atlantic which provides seasonal monsoons. This mix of ecologies, mean that there is both biodiversity-rich tropical forest, and drylands that support a number of rare or endangered fauna, such as pangolin, rhinoceros and elephant. Because of the pressure for economic development, many of these ecologies are threatened by processes like deforestation, biodiversity loss, overfishing, pollution from mining, plastic and other economic processes, and the extreme changes that will result from climate change in West Africa.

The Economic Community of West African States, established in May 1975, has defined the region of West Africa since 1999 as including the following 15 states:

Geopolitically, the United Nations definition of Western Africa includes the preceding states with the addition of Mauritania (which withdrew from ECOWAS in 1999), comprising an area of approximately 6.1 million square km.The UN region also includes the United Kingdom Overseas Territory of Saint Helena, Ascension and Tristan da Cunha in the south Atlantic Ocean.

In the United Nations scheme of African regions, the region of Western Africa includes 16 states and the United Kingdom Overseas Territory of Saint Helena, Ascension and Tristan da Cunha: Mali, Burkina Faso, Senegal and the Niger are mostly in the Sahel, a transition zone between the Sahara desert and the Sudanian Savanna; Benin, Ivory Coast, The Gambia, Ghana, Guinea, Guinea-Bissau, Liberia, Sierra Leone, Togo and Nigeria compose most of Guinea, the traditional name for the area near the Gulf of Guinea; Mauritania lies in the Maghreb, the northwestern region of Africa that has historically been inhabited by West African groups such as the Fulani, Soninke, Wolof, Serer and Toucouleur people,[35] along with Arab-Berber Maghrebi people such as the Tuareg; Cape Verde is an island country in the Atlantic Ocean; and Saint Helena, Ascension and Tristan da Cunha consists of eight main islands located in four different parts of the Atlantic. Due to Mauritania's increasingly close ties to the Arab World and its 1999 withdrawal from the Economic Community of West African States (ECOWAS), in modern times it is often considered, especially in Africa, as now part of western North Africa.