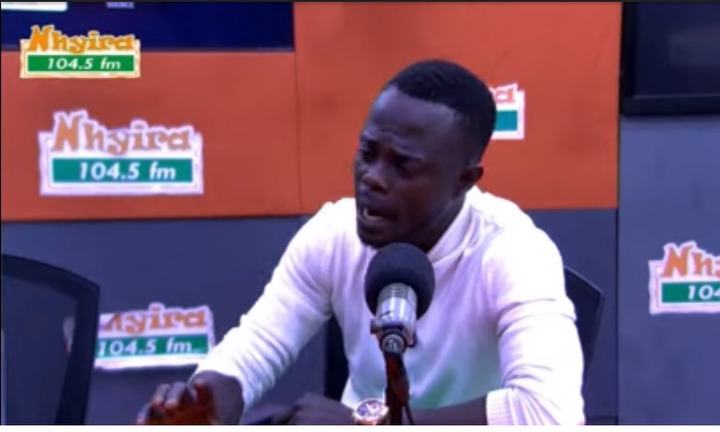 Gyeni Emmanuel is a 38 year man from Apaaso in the Ashanti Region narrates what happened after he travelled to Libya in 2019. The man said he is capable of making new things so he decided to travel to Libya to learn more about what he wants to make. He made all the preparations and stop his maison work he was doing in Ghana and travelled to Libya. When he got to where he started hearing unusual voices which keeps telling him they can help him to invent new machines. When he got there, he started learning new things in a book about the universe.

He used to meditate on the words he learnt from the book. Emmanuel said his girlfriend even broke up with him because of the meditation he has been doing. One day the unusual voice he has been hearing told him to go to the airport, that voice revealed to him that when he gets there some prominent people from Ghana will pick him up with a private jet and come back to Ghana to continue with the meditation but he was arrested when he got to the airport.

Emmanuel said he was then sentenced to 18 months imprisonment for intruding into the airport. After he was released from prison, the voice communicated with him again and told him that a man from America will start processing his travelling documents to America. That voice reveals to him that he will help him create discover a new universe and he will be able to start inventing the things he wants to do.

Emmanuel said whenever he tells his colleagues about how he wants to discover a new universe, they mocked him and even insulted him that he has got a mental illness. He continued that he has started inventing his machines and wants to be like the prominent people who have been manufacturing cars and other machines in Ghana but he needs help to get documents for his new universe he has discovered before he can start his work.