By Movlog (self media writer) | 1 year ago

When we think of bizarre natural phenomena that can’t possibly be real, we usually think of the extraordinary things we’ve found in space: a red square nebula, a glass storm, or the magic island on Saturn’s largest moon, Titan.

But we don’t have to travel that far to satisfy our curiosity. Our own world is full of fascinating natural things. Most of us have never seen or even imagined such wonders . . . until today. Here are 10 natural phenomena that you won’t believe actually exist. 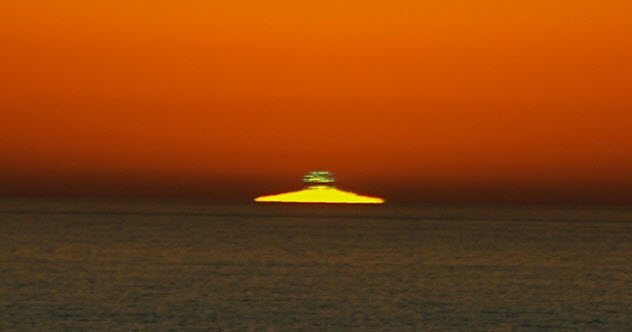 Let’s start our list with something we all know: the Sun. That yellow ball of gas that our planet orbits. The thing that gives us warmth during the day. You know it?

Well, the Sun is something that anybody with sight is familiar with—how it looks at sunset and sunrise. But if the conditions are just right, you might be able to see a magnificent and bizarre event: The sun can change color and turn a shade of green.[1]

This phenomenon is easier to observe at sundown and lasts only a second or two. That’s why this event is usually referred to as a flash. The atmosphere works as a kind of prism, breaking the light from the Sun into separate colors.

So find a place with a nice view of the horizon and a full view of the Sun’s disk, wait for sunset, and keep your eyes peeled. Enjoy that brief flash, knowing that not many have seen it. 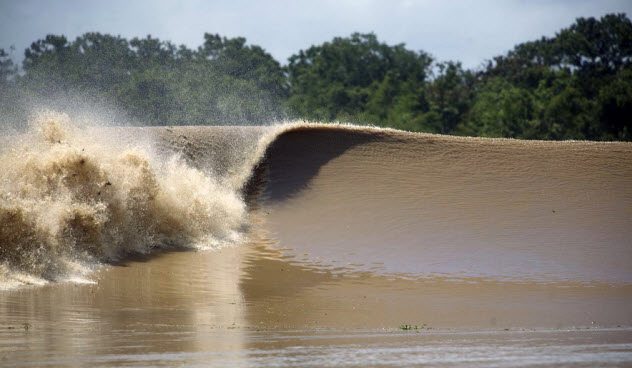 The dream of any surfer is a wave that continues on and on without breaking. That actually happens in Brazil and is known as the Pororoca. The wave can travel 800 kilometres (500 mi) without slowing down, be around 3.7 meters (12 ft) high, and last for over half an hour.[2]

This happens because the Atlantic Ocean tides meet the mouth of the Amazon River. The sound it produces can be heard 30 minutes in advance of its arrival. Since the wave contains debris from the river, which can be entire trees, it’s also the most dangerous wave to ride. 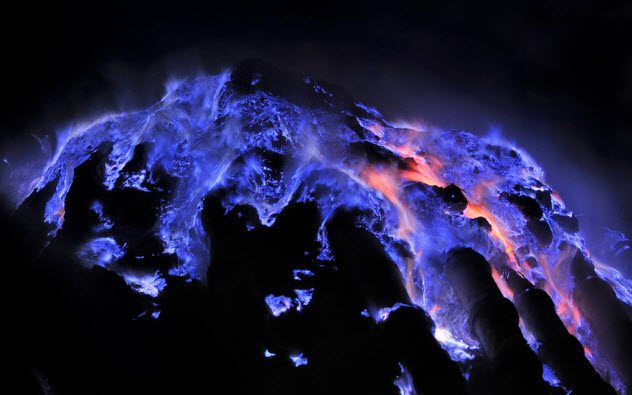 One of the most destructive occurrences in our world is the explosion of a volcano. But in Indonesia, theIje Kawah n crater on the island of Java appears to spout blue lava instead of the traditional yellow and orange tones we are all used to.

In reality, it’s only the blue flames from the sulfur flowing down the mountain. That’s why this effect only appears at night. 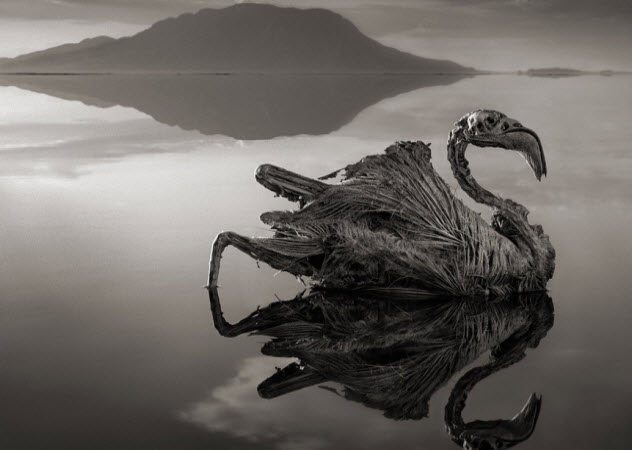 A serene lake, a fantastical view, and mummified animals—you know, your typical scenery. Joking aside, Lake Natron in Tanzania is a source of some of the most haunting images ever captured.

The lake has a high pH, making it caustic enough to burn the skin and eyes of undaunted animals. However, the lake has a nurturing ecosystem of animals that have adapted to life in this harsh environment.

Even so, whenever an animal is unlucky enough to die in the lake’s waters, its body undergoes a type of mummification. The lake became famous worldwide after photographer Nick Brandt captured truly haunting images of dead animals there. He found the dead creatures washed ashore and proceeded to pose each one as if it was still alive.[4] 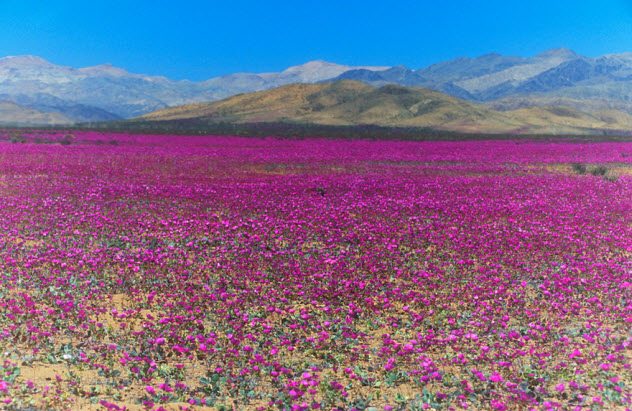 Deserts are known for three main things: scorching heat, minimal flora and fauna, and lack of water. But in the Atacama Desert, things are just merely waiting for the right opportunity. Where some will see a lack of possibilities, the desert proves to us that the right environment is necessary for greatness to flourish.[5]

The bloom happens between September and November and only in years when rainfall is unusually high. It is known locally as desierto florido (“the flowering desert”).

The event happens every five to seven years. But changes in the climate, extended storms around the globe, and historic rainfall have recently produced a bloom only two years after the last one. 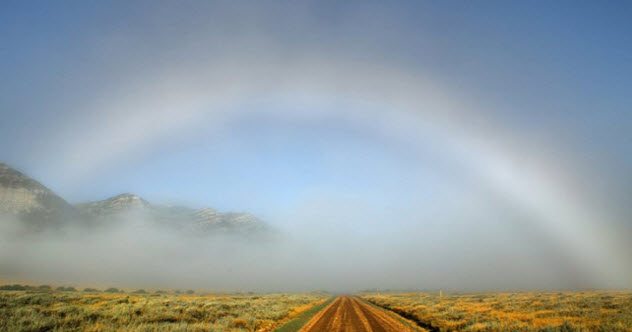 Rainbows are one of the most common and beautiful things you can see. Water works as a prism to break the light into the visible spectrum of colors. But every so often, there is a special type of effect that happens when conditions are ideal.

A colorless rainbow occurs in the same fashion as other rainbows, with sunlight passing through water droplets. But in this case, it happens when fog is forming. The droplets in the fog are much smaller. As a result, most color is lost while passing through them.

There is color in these rare rainbows. But it is in such a weak form that our eyes have trouble perceiving it.[6] 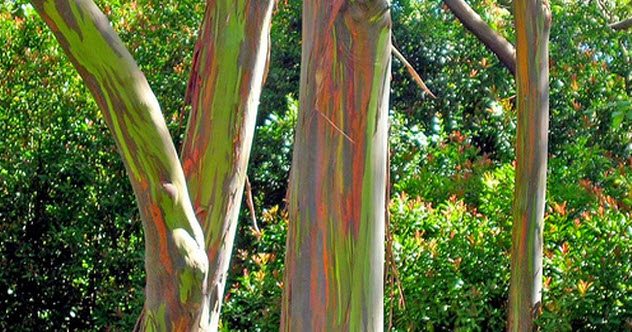 Do you like rainbows? How about trees? Ever wondered what the combination of the two would look like?

Well, here we have Eucalyptus deglupta, commonly known as the rainbow eucalyptus. Native to the Philippines and other tropical areas, it can grow up to 76 meters (250 ft).[7]

Most of the year, the tree has a smooth orange bark. But in summer, the tree loses this husk to reveal a multicolored bark which gives it the name of “rainbow.” Streaks of green, red, orange, gray, and even purple cover the bark. 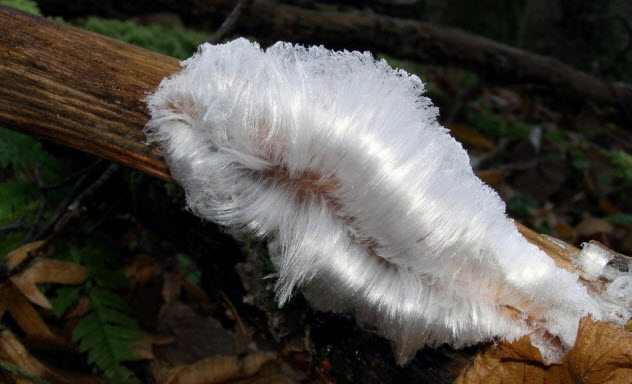 If you live in a place where snow falls, then you are probably familiar with any kind of ice you can imagine. But we guarantee that you have never seen this type of ice.

It is commonly known as hair ice. It grows only on humid winter nights and usually melts in the day. Ice crystals form on rotten wood that has a presence of mycelium, which are the roots of a fungus that lives on rotting wood.

The fungus makes the ice crystals grow in a hairlike fashion. It is incredibly hard to spot because any snow around this beautiful type of ice will camouflage it. So next time you are taking a stroll through winter woods, keep your eyes peeled and check the forest floor. You might find this beautiful treat.[8] 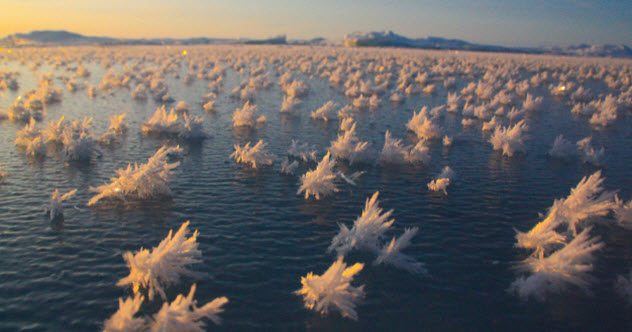 Similar to hair ice, these formations are beautiful to observe and equally rare. The main difference is how and where they form. Frost flowers mainly form over water or humid surfaces.[9]

When the cold humid air above a water surface becomes saturated, frost starts to form on any imperfections on the water surface. These imperfections are the rooting for these “flowers,” and the moisture from the air helps them rise. 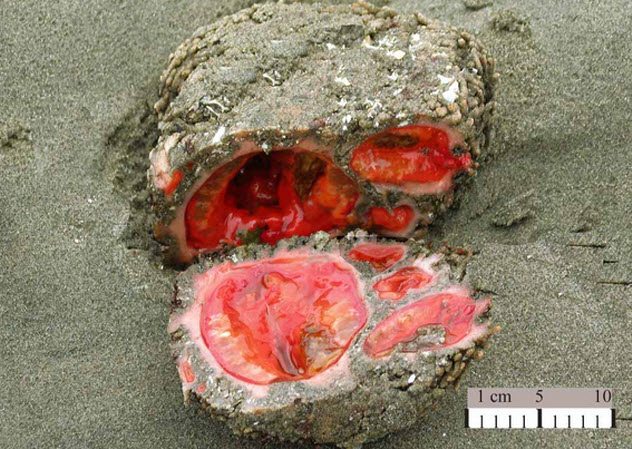 Rocks can be found everywhere. If you look inside your shoes after walking on a trail, chances are you are carrying some with you. They are dry, rough, and hard. But sometimes, you can find one that bleeds.

Introducing Pyura chilensis, also known in Spanish as piure, this “rock” is actually a sac like marine invertebrate filter feeder (aka sea squirt). These filter feeders have a characteristically blooded hue to their insides which gave them their nickname of “bleeding rocks.” Locally, they are eaten raw like an oyster or cooked with salad and rice.[10]

Carlos is a graphic designer and photographer. He is currently working as a macro photographer and content writer. 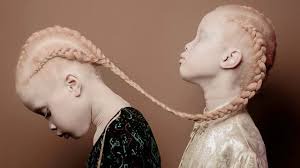 Content created and supplied by: Movlog (via Opera News )