Six American Tourists Are Stranded On The Nzulenzu River After The Boat's Fuel Runs Out.

Six American tourists are stranded on the Nzulenzu River after the boat's fuel runs out. Tourists from the United States who visited Ghana for an eight-day exploration of major tourist attractions had a number of unpleasant experiences. The six ladies, led by their tour agent, Vincent Kofi Osei, a Kumawood/Ghallywood actor, became stranded on the Nzulenzu lake when their fuel ran out in the middle of their journey. In addition, the facilities and conditions at three other sites visited by the Americans disappointed them. A group of six American tourists who came to Ghana to see the country's beautiful sights ended up having a series of bad experiences in the process.

The ladies toured four regions in Ghana between July 3 and 10, 2021, according to the tour agent, Vincent Kofi Osei, who has also acted in several Kumawood and Ghallywood films. One of the most distressing incidents occurred on the Nzulenzu Lake in the Western Region, 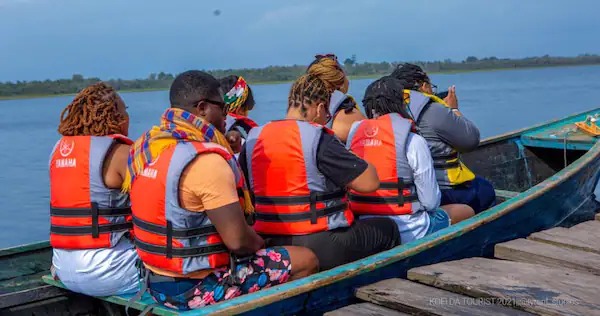 when tourists were trapped in a boat mid-transit because the fuel had run out, and the foreigners were forced to endure the panic for as long as it took for another boat to be dispatched to transport

A booking was made about three months ahead of schedule at the paragliding site at Kwahu in the Eastern Region, but when the time came, the pilot was still in Accra, making the adventure a failure. Separately, Vincent recalled that the facilities at Lake Bosomtwe were insufficient, to the point where there were insufficient life jackets for the small number of tourists.

"One of the worst experiences we had was at a hotel where we were staying. My clients had major problems in each of the six rooms. We had to find a new hotel to stay in " According to Vincent

After hearing about all of the negative experiences the Americans had, Vincent came to the conclusion that the government needs to do a lot more to improve Ghana's tourist attractions. The tour agent, who has worked in the industry for a while, stated that it appears the government's efforts are focused on projecting Ghana as a habitable and hospitable place when there is still a lot of groundwork to be done. What is the government doing?