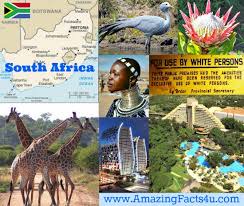 A continent that spans the hemispheres, Africa has been home to some of the world’s oldest civilisations and today has some of the fastest growing nations in the world.

Africa is a place that often appears to confound expectations and defy convention, a place always full of surprises.

Here are 9 facts about the continent that may come as a surprise.

There are thought to be around 2,000 languages in use on the continent. All are considered official languages of the African Union. Nigeria alone has over 500 living languages.

It is the world’s hottest continent and the second driest after Australia. Despite being nearly four times the size of Europe, its straighter shores mean it has a shorter overall coastline.

Over 50% of Africans are under the age of 20, compared to a global median age of 30. Africa has the world's highest child-dependency ratio - with 73 children under the age of 15 for every 100 people of working age. That's nearly double the global

Ethiopia was the world’s fastest growing economy in 2015

The IMF says the country’s real GDP grew by 10.2%. But growth for the sub-Saharan region as a whole fell to 3.5%, the lowest level in 15 years, and is predicted to fall as low as 3% this year.

Almost 40% of adults in Africa are illiterate

Two-thirds of them are women. Progress in improving literacy on the continent has been slow - in 1990 the proportion of adults who couldn't read and write stood at 48%, according to UNESCO statistics (PDF).

The country's film industry employs over one million people, and produces around 50 movies each week. Only Bollywood makes more. In 2014 the Nigerian government released data showing Nollywood was a $3.3 billion industry.

Africa has around 30% of the earth’s remaining mineral resources

This includes over 40% of gold reserves and 90% of platinum reserves. Nigeria is the world's fifth largest exporter of oil, ahead of Iraq and Kuwait, according to the CIA World Factbook.

Considered by many scientists to be the origin of mankind, Africa is a continent of 54 independent countries and a rich mix of native peoples, cultures, economies and history.

The scenic beauty and variety is quite stunning, it is home to vast deserts, tropical rain forests, rugged mountains and fertile grasslands. It is abundant in flora and fauna unsurpassed by any other continent.

An ever-increasing number of tourists from around the globe are drawn to this incredible continent every year to experience its wonders.

Yet despite its natural wealth and beauty, Africa includes the fifteen least developed nations in the world, 70% of its population survives on less than $2 a day, disease and famine continue to kill millions of its people each year, and even the most basic education is denied to a large percentage of its children.

"Africa is still the poorest continent in the world, the biggest sufferer of HIV and AIDS, the continent with the most external debts and the least foreign investment. But we are lot more hopeful than we were 5 or 10 years ago." ~ IBRAHIM GAMBARI, United Nations special representative for Africa

Africa is considered to be the second largest continent in the world with a total area of around 11 million square miles that account for 5.7% of the earth's surface as well as 20% of the total surface of land on our planet.

It has a rich geography as well as an interesting history thus making it a continent with such biodiversity that is awe inspiring. Africa has much more to it than poverty and apartheid, for which it is well known the world over.

There are 54 countries as well as quite a few disputed territories. Sudan used to be the largest country in Africa until it was split into Sudan and South Sudan. Algeria is now the largest African country by geographical area. Cairo is the capital city of Egypt and is also the largest city.

As far as the size is concerned along with the population Africa is the second largest continent. Africa is filled with some of nature’s greatest wonders, there are a few facts about Africa given below that will help you to understand more about this beautiful continent.

• One of the most interesting facts about Africa is that the length and breadth of this continent are about the same. It measures around 4,660 from north to south and from east to west.

• Africa is not only the second largest but the second most populated continent as well and houses about 12% of the world population.

• The African continent has approximately 3,000 distinct ethnic groups while Nigeria alone has about 370 of these tribes that have been officially recognized. You will find more information on African culture here.

• Around 2,000 different languages are spoken in Africa and each of them have different dialects while Arabic is the language that is most widely spoken in the African continent.

• The Equator goes around 2,500 miles from the west to the east of the African continent thus dividing this continent into two separate halves – north and south. It passes through many of the African nations such as Congo, Somalia, Uganda as well as Kenya.

• Africa also boasts of having the longest river in the world which is the Nile that runs for around 4,150 miles before it meets the ocean. It flows through several African countries such as Ethiopia, Sudan, Uganda as well as Egypt thus making the land extremely fertile.

The largest waterfall in Africa is the Victoria Falls and it is located on the Zimbabwe and Zambia border. It has a height of 355 feet and the width of the water fall runs into almost a mile.

• The largest desert in the world the Sahara desert is also situated in Africa and it spans across at least a dozen countries - around 3.5 million square miles.

• Africa also boasts of the best flora and fauna in the world. It has the most flourishing wildlife in the entire world. It also houses some of the fastest animals on land such as the cheetah, wildebeest, gazelle and lion. Find out more information on the African animals here.

• Africa’s mining is well known and the continent produces at least 50% of the diamonds and gold in the whole world. The rest of the countries around the world contribute to the remaining 50% of the production of these precious stones and metal.

If you know any other interesting facts about Africa that you would like to share with us please contact us and we will happily display them here.