By Rasstingo (self media writer) | 4 months ago 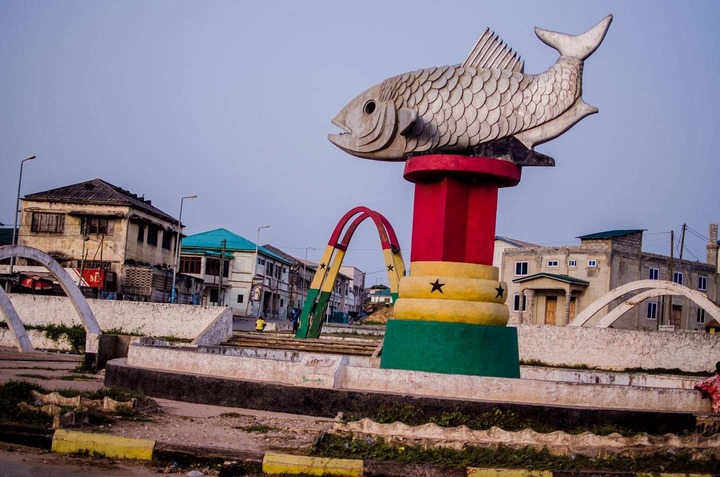 Sekondi-Takoradi is made up of two cities; Sekondi and Takoradi. Popularly referred to as the ‘Twin City’, the capital of the Western Region of Ghana has mainly Fantes.

The city which has now come to be known as the ‘Oil City’ has chief industries in Sekondi-Takoradi, including timber, cocoa processing, plywood, shipbuilding, its harbour and railway repair, and recently, sweet crude oil and crude oil.

Fishing is the predominant profession of inhabitants of the capital.

The name Sekondi is a corrupted word of 'Sekunde'. Sekunde a an Ahanta word. The Dutch in 1640 built a fort, called Fort Orange to boost trading activities.

On the other hand the name Takoradi is a combination of the Portuguese word, Taccarada….and a local word Ntakor. Before the Whiteman came, the local inhabitants, mostly the Ahantas called the place Amanful-kro meaning Amanful’s town or simply Amanful.

The Portuguese in 1485 built a slave post where the harbour view is and called it ‘Taccarada’. At the same time, the local people had already given the name ‘Ntakorase’ for the same area, the name which meant ‘under the Ntakor tree’.

The Portuguese could not pronounce the ‘Ntakorase’ well enough and the locals; the Ahantas could also not pronounce Taccarada very well. With time, the pronunciation of both words merged to form Tacorrasi which was pronounced as ‘Takoradze’ by the locals.

Before 1,800, the name had become Takoradi which remains the official name today. (From the archives of Sekondi Library © By Joe Hanson).

Ho is the capital town of the Volta Region. The inhabitants of the township speak the ‘Ewe’ language and mostly engage in farming.

The town lies between Mount Adaklu and Mount Galenukui or Togo Atakora Range and is home to the Volta Regional Museum, a cathedral, and a prison.

“In Ewe, the word ‘Ho’ means to move with bag and baggage.

By calling people from Ho the ‘Hoawo’s, one is unknowingly referring to them as people who moved with everything they had from the great wall of Notsie.” 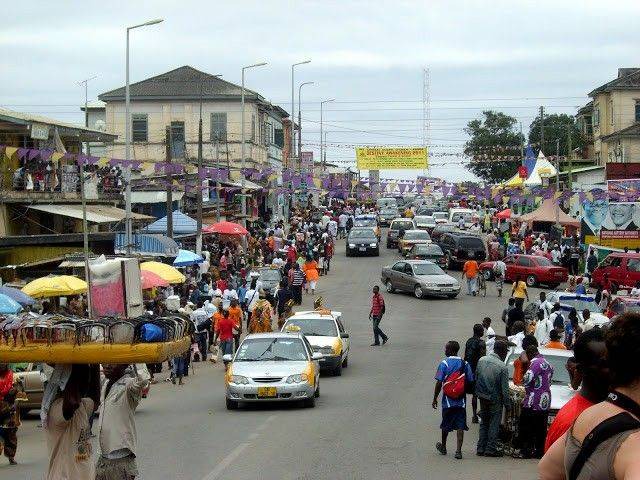 It is the capital of the Central Region. A fishing port, with its inhabitants, mainly engaging in the fishing profession.

Its main language is Fante. Cape Coast is derived from the Portuguese name ‘Cabo Corso’ meaning ‘short cape’, the name Portuguese settled on for the local settlement within which its trade lodge was built in 1555.

Sunyani is a city and the capital of Sunyani Municipal and Brong-Ahafo of south Ghana. It consists mainly of the Bono tribe.

The word derives from the Akan word for elephant, ‘Osono’.Sunyani is a corrupted pronunciation of ‘Sonodwae’, meaning a place where elephants were being butchered.

Techiman is the capital of the newly created Bono East Region of Ghana. It is known for its trading activities. The town is arguably one of the busiest towns in Ghana.

The town was founded by Nana Takyi Firi after the first capital, Bono Manso was destroyed by the Ashantis in a war in 1723. ‘Bono’ means firstborn, ‘man’ means nation and ‘so’ means on – Bonomanso is literally translated, ‘on the nation of the firstborn people of the Akan’.

Techiman, therefore, is an anglicized name from the combination of ‘Takyi’ and ‘oman’ which means ‘Takyi’s town’.

Sefwi Wiawso is the capital of the Western North. It is not known for certain when the name Sefwi came to be applied to this area. Sefwi is said to be the contraction of the Twi phrase, ‘Esa awie’ or ‘Esa hie’ meaning ‘War is over’.’

It is interesting to note that it was only in the early 19th century that the name appeared in the European records. It was used by immigrants from Bono-Techiman,Wenchi, Adanse, Denkyira, Assin and Asante who settled on the territories of Aowin (modern-day Sefwi) escaping the 17th Century wars. 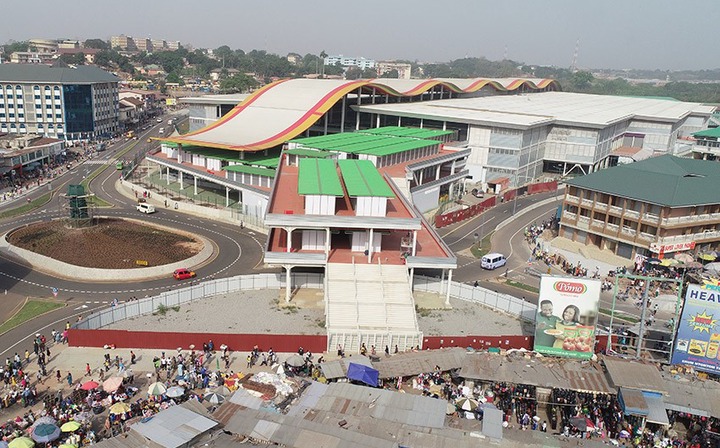 It is arguably the second-largest city in Ghana with a population of over 3 million persons.

As the capital of the Ashanti Region, Kumasi is popular for its trading and industrial activities.History has it that the first ruler of the Asante Kingdom, Otumfuo Osei Tutu I, together with his Fetish Priest and close companion, Komfo Anokye, designated Kumasi as the capital.

The name Kumasi comes is from the Twi language, meaning “Under the Kum tree.” The word “ase” or “asi” means “under, down, or below” and is used in many other names of places in Ghana, such as Obuasi, Daboase, and Kenyase.

Some accounts say Okomfo Anokye planted two Kum trees in the forest and predicted that one tree would live and become the capital of Ashanti. Hence the name Kumasi (the tree lived); the place in which the other tree was planted and died became Kumawu (the tree died).

Located in the Upper East Region of Ghana, Bolgatanga, popularly known as Bolga is known for its farming and culturally inclined activities. The town is largely known as the crafts center of the Upper East region, with a large central market.

The word Bolgatanga comes from the Frafra words bolga “rock” and tenga “city.”

Wa is predominantly occupied by the Waalas. ‘Wa’ means come, in the ‘Waali’ language. According to research by Ninfaazu (Mphil Student of the Institute of African Studies), the name Wa by its etymology means “we came to watch a dance”.

A mosque; tourist site at Wa 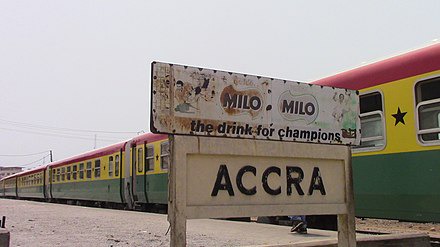 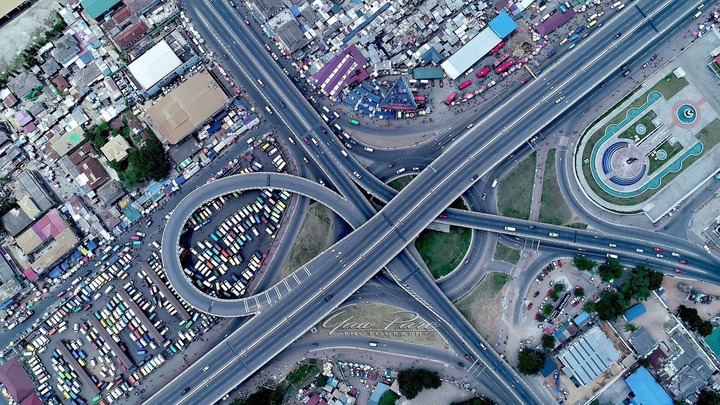 The capital of Ghana and the largest city with an urban population of over 4 million people.Located in the Greater Accra Region of Ghana, the city serves as the nation’s economic and administrative hub.

With several tourist attractions and business centers, Accra serves as the original home to the Ga tribe.

The word Accra is from the original Twi word, ‘Nkran’ which means ‘ants’, a reference to the numerous anthills that characterised many parts of the countryside around Accra before buildings took over.

Koforidua, also popularly known as K-dua or Koftown, is a city and the capital of Eastern Region in southern Ghana.

Oral tradition has it that, Koforidua owes its name to an Akan man, Kofi Ofori, who had built his hut under a huge mahogany tree. This tree provided shelter for weary farmers who were returning from their farms after a hard day’s work.

Over time, it became common for the farmers to say that they were going to rest under Kofi Ofori’s tree. In Akan, the south country’s native language, the twi word for tree is “dua” hence the name “Koforidua.”

Goaso is the capital of the newly created Ahafo Region from the previous Bono-Ahafo region. The town has a very rich vegetation cover and is arguably one of the ‘food baskets’ of Ghana.

The town is near the River Goa.

According to historical accounts, when emigrants arrived at the place, they discovered a river that was filled with a variety of fishes. The surrounding forest was also rich in game, fruits and other natural resources.

They, thrilled by the abundant resources in the forest, remarked that they had reached a place of ‘Ogoo’, which means abundance, in reference to the rich resources they discovered.

‘Ogoo’ eventually became the name of the river. With time, the name became ‘Goa’ and the town was called Goaso to mean, ‘On top of Goa’. Goaso, therefore, means ‘place of abundant resources that makes life comfortable”.

Damongo is a town and the Capital of the newly created Savanna Region.It is known for its tourist sites including the Mole National Park and the Larabanga Mosque.

Though not confirmed, some historical accounts have it that, Sumaila Ndewura Jakpa, the founder of the Gonja Kingdom, during his quest to expand his territory and possess lands, decided to rest after one of their wars, in a very abnormally cold land before proceeding to fight the next village.

His wife remembered she left behind the calabash her husband drinks water from. Asked where she left it by her husband, her response was ‘npka ni an di awo na’ to wit ‘where we slept out in the cold’.

The founder decided then to call the town ‘Di ma awo” which eventually became Damongo.

Nalerigu is the largest town in the North East region of Ghana and the traditional capital of the Mamprusi people.

Na-leerigu could mean ‘place for the habitual installation of chiefs’ but oral history has it that the name is from the word Na – naafu (cow) and lerigu (from the noun form of leeli (lick).

It is not quite certain how the name came about but some locals say the first settler on the land urinated on the ground and then a bush cow came and licked the ground where he had peed (because of the salt in the urine),hence the meaning of the name.

Dambai is the capital of the Oti Region, located on the eastern side of the Oti River, a tributary of the Volta Lake. The town takes its name from the local name ‘Dam nafiba’ from the Nchumuru language of the indigenes.

‘Dam nafiba’ means to be spiritually strong. History has it that, the place was full of wild animals such as lions, tigers, elephants that the first settlers of the town had to contend with. 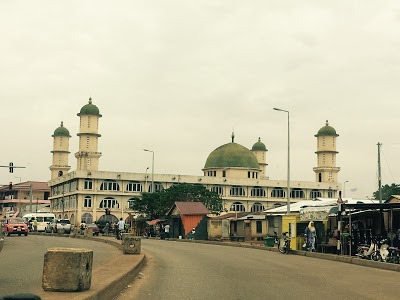 Tamale is the capital town of the Northern Region. At the time, the place was just a cluster of villages known mainly for the numerous shea butter trees – the ‘tama’ from which it got its name Tamale.

The tree is known as táángà, pl. táánsì, and the fruit, as táánì, pl. támá. The name is originally “Tama-Yili”, “meaning home of Shea Butter”.